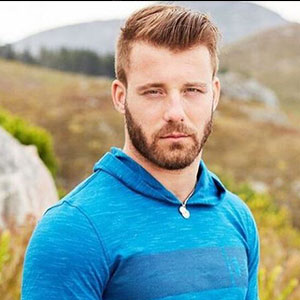 Paulie Calafiore is an American DJ who just turned into a reality television personality. He started getting famous after he attended Season 18 of CBS reality show 'Big Brother.' He is also a co-founder Sweat Elite Fitness gym. Because of his musical skill and fitness skill he has won the hearts of millions of people across the world.

Paulie Calafiore was born on November 13, 1988, in Howell, New Jersey, the United States under the zodiac sign of Scorpio. Paulie holds an American nationality and belongs to white ethnicity. His father's name is Paul Calafiore and mother's name is Linda Calafiore. His has a brother, Cody Calafiore and a sister Angelina Calafiore.

He completed his high school education in New Jersey and he was a three-time captain of his high school soccer team. After high school, he joined Rutgers University, New Jersey. Cody is known as a contestant of 14th season CBS show Big Brother.

Paulie Calafiore started his career as a DJ in 2005 in Vesey Entertainment. He worked as DJ for 4 years and later co-founded Sweat Elite Fitness gym in 2009. Because of his Musical and fitness skills, he won millions of hearts and made his excellent impression among his audiences.

Paulie's popularity increased after he joined the 18th season of Big Brother just like his older brother Cody Calafiore who participated in the 14th season. After he appeared in the famous CBS TV show, he garnered even more fans which also earned him several other roles. Later, he was seen in MTV's Ex on the Beach and later he started working on The Challenge: Final Reckoning.

You May Also Like Nikki Mudarris, Vanessa Simmons, Elita Loresca

Red shoes. Red car. Zero Fucks Given... it’s a lifestyle, not a choice. Comment a if the lifestyle chose you #ZeroFucks #Lifestyle

Calafiore owns a luxurious car which he has also posted on his social media account, however, it is still unclear about the brand and the price of the car.

Paulie Calafiore is currently in a relationship with Cara Maria Sorbello. He met his TV personality girlfriend on the sets of MTV's The Challenge: Final Reckoning.

Paulie and Maria confirmed their relationship during an interview with US Weekly in July 2018. Maria even said that Paulie is not controlling her and doesn't ask her million questions which keep them happy in their relationship. Calafiore told:

I guess you would have to call it dating. The thing about my past relationships is theory were very very controlling. I like the freedom to do as I wish but to choose on my own terms not to do it. The thing about him that I love is that he's not jealous at all about anything.

Cara was not his only girlfriend, he was in an affair with a former Bachelor contestant, Danielle Maltby. They announced their relationship to the public on January 29, 2018, through Instagram. They even went on a vacation to celebrate Valentine's Day, but the relationship didn’t last for long and they broke up soon. After their separation, he soon got in a relationship with Cara.

Below, we have presented you a video where Paulie gives a Lap Dance for Zakiyah in a TV show Big Brother.