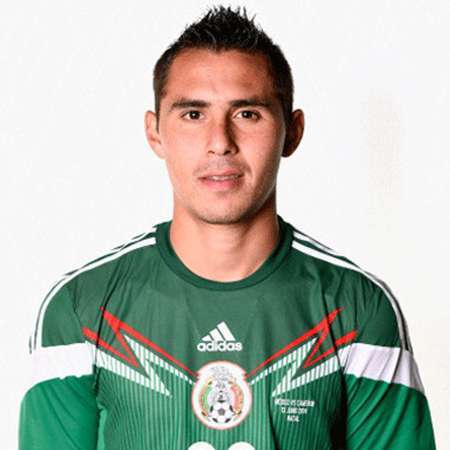 Paul Nicolas Aguilar Rojas commonly known as Paul Aguilera is a renowned Mexican footballer playing as a right back for America of the Liga MX. His date of birth is March 6, 1986, and he was born in Concordia, Mexico. His Mexican team was part of the 2010 FIFA World Cup that was held in South Africa. His Mexican team had also won the 2011 CONCACAF Gold Cup that took place in the United States. His ability to a goal from a long distance and overlapping midfielders is often appreciated. He is an incredible defender.

Paul Aguilar was born to Emilio Aguilar, his father, and Maria Aguilar, his mother. He had supportive Parents. He didn’t know he would be a footballer as he seemed more interested in baseball that was widely popular in Mexico then. He was sixteen years old when he came under the notice of Pachuca. He started playing for Pachuca Club de Futbol from 2002. Since he was a mere beginner he was adjusted in the second division team named Pachuca Juniors.

He was loaned to Indios de Ciudad Juarez for a period of two years to gain some experience in the field. He played 27 consecutive matches for Pachuca after coming back from the training. He played all the matches as Pachuca Juniors. He made his first debue against Cruz Azul in 2006 Apertura on six August which was a loss. However, he had played for ninety minutes in the game and had a score his own goal at the 56th minute.

He, however, won the 2007 Clausura championship against America in the final match. He had now become the most trusted and consistent player on the team. He had also participated in the 2008 and 2010 FIFA Club World Cups with Pachuca. Because of his spectacular performances in his matches he was sold to America for 2011 Apertura.

Paul Aguilar's Career And Net Worth

He played his first match for America on 31 July, 2011 against Toluca that ended in a draw with the score 1-1. He is known to be a charismatic player who is extremely liked by his peers. His acrobatic goal celebrations grooving in his own dance form and doing some backflips has also contributed in his popularity. He registered his first goal while playing for America in the Super Clasico against arch-rivals Guadalajara which they won with 1-0 score.

He also won a match for America playing against Cruz Azul in the Clausura final on 26 May, 2013. He has signed a two year extension contract with America till the year 2016. He has also given remarkable performance playing against Guadalajara that was a 4-0 win making his 100th league appearance. He has made appearance in several international matches for Mexico. He appeared in a friendly match for 2010 FIFA World Cup in South Africa. The first game was a win for Mexico against Bolivia with a score 5-0. He had been part of CONCACAF Gold Cup in 2011 playing a single match against Honduras. He had also been part of 2011 Copa America held in Argentina.

Paul Aguilar is married to Berenice Cabrera (spouse) and has children with her named Paula Sofia Aguilar. He has a happy contended personal life. He has received several honors for his hear throbbing performances such as CONCACAF Champions League 2007, 2008, 2009-2010, CONCACAF Gold Cup 2011, and Liga MX Clausura 2013. His height is 1.77m and weight is 65 kg.  His current market value is £1.62m. His highest market value was £2.52m in 2015. His current team are Mexico national football team and Club America.