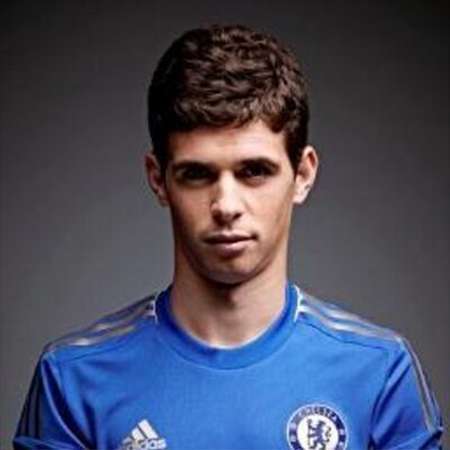 Oscar dos Santos Emboaba Junior is popularly known as Oscar is a Brazilian Mid-fielder in the world Football arena. The Date of Birth DOB of Oscar is 1991 September 9. He was born in South Americana, Sao Paulo, Brazil. This young Mid-fielder aged 22 has the Height of 180m. He is married to his childhood sweetheart named Lumila. He started his professional Career from 2008. He currently plays for the renowned club Chelsea FC from squad number 11 and also for the Brazil National Football Team. This right footed Mid-fielder has the current market value of 34.000.000 Euros. His agent is Euro Export Assessoria e Propaganda Ltda.

Oscar started his youth creer from the club Uniao Barbarense. He joined the club in 1998 at the age of 7. He was with the club until 2004. Later in 2004, he moved to another native club called Sao Paolo. He was with the team from 2004 to 2009. In 2008, Oscar played for the victory of the Brazilian Serie A which had been his professional move. From 2008-2010, Oscar played for Sao Paolo. He played 11 matches for the club. Due to his irregularities in his contract with the club, he was taken to the court. After a series of controversies in Sao Poalo, Oscar moved to Internacional arenas in 2010. He played for the team until 2012. He appeared in 36 matches scoring 12 goals for the team. He had to leave the team because of the Salary issues. His agent claimed that the club did not pay the amount what was promised. Later in 2012, Oscar signed the contract with Chelsea FC with the fee of 19.35 million pounds. This attacking Mid-fielder has played 66 matches from the club bagging 12 goals in his name from the club.

In 2009, Oscar was included in the under 20 Brazilian National Football Team. He played 25 matches from this team bagging 6 goals. In 2011, Oscar was one of the players in the Brazil National Football Team. He has played 29 games from this team so far scoring 9 prominent goals for the National Team. He was one of the players for Brazil to be honored with South American Youth Championship: 2011, FIFA U-20 World Cup: 2011, Superclasico de las Americas: 2011, Olympic Silver Medal: 2012, FIFA Confederations Cup: 2013. He was named Man of the Match at 2011 Under-20 World Cup after scoring hattrick goals against Portugal.

Oscar is a talented football player who has impressed many of the football fans across the world. He has got great dribbling skills, creativity, positioning in the game. He is a fine finisher who uses either of the foot. He has sharp passing skills. His shooting skills and vision in the game are to be praised. He is a technical, agile and energetic player with the good discipline in the game. However, his tackling skills and club loyalty are to be improved for achieving good Career statistics in the future.