Nusrat Jahan Rafi, a 19-year-old Bangladeshi student reached her school for her final examination on 6th April 2019, but she might have never thought it would be her last day in her school.

Nusrat who belonged to Feni, a small town around 100 miles south from the Bangladeshi capital Dhaka was studying at an Islamic school. When she reached her school on 6th April, instead of placing her in the examination hall, one of her female friends took her to a secret place where she was burnt alive afterward.

Four days after she was set alight, she died in Dhaka Medical College Hospital. Everything that happened in these five days has brought attention to the vulnerability of sexual harassment victims in Bangladesh. 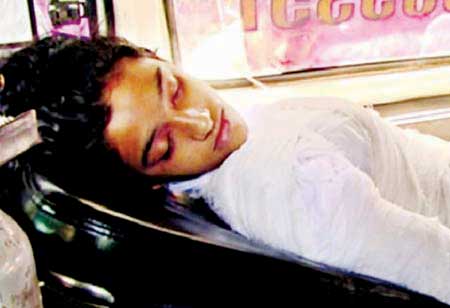 According to BBC, a group of people doused her with kerosene and set on fire before fleeing the scene. The planned murder stemmed from the case that Nusrat filed in the local police station complaining her headmaster's inappropriate behavior.

As per Nusrat's complaint, she was called at her headmaster's desk who repeatedly touched her in an inappropriate manner but before the things could go any further, she ran out.

During her statement to the police, she said she should have been provided with a safe environment to recall her traumatic experience, however, the officer in charge filmed her on his phone as she described the ordeal.

In the video, the officer leaked to local media, Nusrat can be seen distressed to be filmed on and tries to hide her face with her hands. Moreover, the police officer can be heard calling the complaint "no big deal."

After her statement, police arrested the headmaster but the thing went worse after a group of people arranged by two male students and local politicians was gathered in the streets demanding his release.

Unlike other local girls, Nusrat dared to speak against the sexual assault which became the reason for her death. The culprits fled the scene leaving Nusrat  burning in a belief that she would die which Police Bureau of Investigation chief Banaj Kumar Majumder told: "to make it look like a suicide."

But their plan failed as Nusrat was rescued and taken to the nearby hospital where doctors found burns covering 80% of her body. They sent her to the Dhaka Medical College Hospital.

On the way to the Dhaka Medical College Hospital, Nusrat recorded a statement on her brother's mobile phone in which she told,

The teacher touched me, I will fight this crime till my last breath.

She also gave the statement on her attackers saying a fellow female student took her to the roof of the school saying her one of their friends had been beaten up. But when she reached the rooftop, four/five men in burqas surrounded her and pressured her to withdraw the case. When she refused to take her case back, they set her on fire.

Four days after the heinous attack, Nusrat died on 10th April and thousands of people turned out for her funeral in her village, Feni. Since then, police have arrested 15 people among them, seven are believed to be involved in the murder. 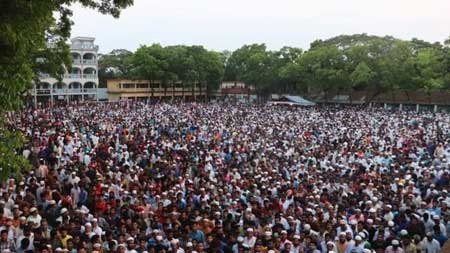 Thousands of crowds gathered in Nusrat's hometown for her funeral SOURCE: BBC

Meanwhile, Mahmudul Hasan Noman, Nusrat's brother told of the day he took his sister to the school as:

I tried to take my sister to school and tried to enter the premises, but I was stopped and wasn't allowed to enter. If I hadn't been stopped, something like this wouldn't have happened to my sister.

The officer, who filmed Nusrat while she made her statement has been removed from his post and transferred to another department.