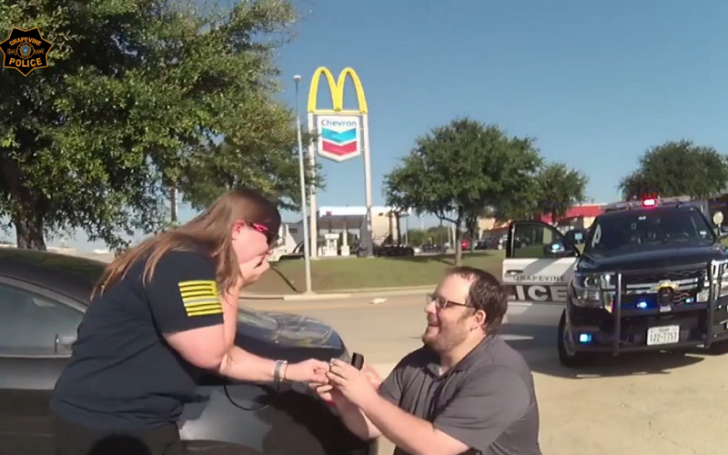 A Texas police dispatcher, on Tuesday, prepared to have his girlfriend getting her stopped by an officer under the trick that her car was reported stolen so that he could surprise her with the marriage proposal.

Amanda Radican was only trying to help her boyfriend get his phone back but on her way, she suddenly pulled over and rolled down her window on State Highway 114 in Grapevine, Texas. To her surprise, Grapevine police officer Chad Hale informed that not only was she going 52 mph in a 45 mph zone, but that there was also a warrant out her car.

The police officer asked her to step out from the car to solve the situation clearly and Radican being confused and naïve, didn't know that her boyfriend Smith was tracking her every move via Find my iPhone app, and that Hale was recording the interaction with his body cam, was in on the proposal setup of a lifetime.

Crying and shaking, Radican did what she was told to do by the officer. As she was explaining to the officer that her boyfriend was a dispatcher for the Grapevine Police Department and that she was going there just to give him his phone back, another squad car pulled up behind her. Smith then walked up behind her, got down on a knee and proposed. He also explained to her that the stop was just a ruse.

“You are wanted...” he announced, pulling out a ring. “By me,” he added, dramatically. After fighting back her tears and saying, “I was so scared,” she accepted Smith’s proposal.

Radican shocked after hearing the proposal from her boyfriend Smith

The Grapevine Police Department wrote alongside the proposal video on Facebook, saying that, “The entire traffic stop lasted under five minutes, but the memory will last an eternity.”

Congratulations to the happy couple!