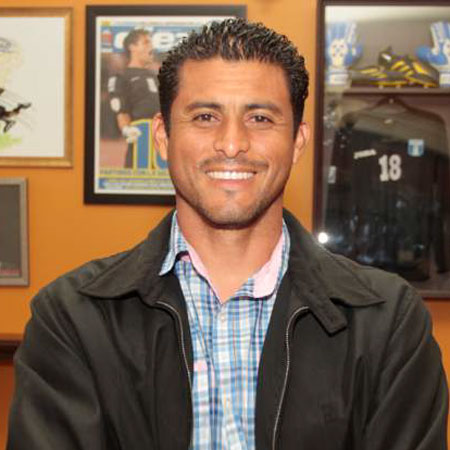 Born on 3 of May in 1977 , Noel Eduardo Valladares Bonilla is well-known Honduran football goalkeeper. He was born in Comayagua of Honduras. His birth sign is Taurus which says he is a patient and reliable type of person. This kind of person are always persistent and determined. Currently plays for the club Olimpia which is a Honduras football club based in Teguciglapa, Noel is the second most capped footballer of all time after Amado Gueva. He is assigned with the No.27 as his squad number. His height is 1.79 m with his weight weighing 80 kg. As current teams he is playing for club Olimpia and the national Honduran football team.

In his personal life, he is a very shy type of person due to which he is also called as The Secret.

Starting his career at local club Real Comayagua, he made his professional debut in 1997 at the age of 20. Firstly at the beginning of his career he started playing as a striker for several seasons at Motagua. After sometime he turned into goalkeeper in Motagua and then in Olimpia. Similary in 2003 he had scored his only goal for Motagua against Olimpia.

Talking about his experiences in Olympics , in Sydney 2000 summer Olympics he was a member of the national squad. Before that at 1999 Pan American games in Winnipeg he played as both goalkeeper and forward for his country Honduras.Similarly, in June 2000 FIFA World cup qualification he made his senior debut for Honduras in the match against Haiti. And in February 2013 scoring no goals  he earned a total of 105 caps. Playing in all three matches at the 2010 FIFA world Cup, he has represented Honduras in 46 matches of FIFA World Cup qualification. He earned Man of the Match award in the team’s final match against Switzerland in 2010 FIFA world Cup.Apart from this , he had played in different matches including 2009 and 20111 UNCAF Nations Cups as well as at 2011 CONCACAF Gold Cup and 2011 Copa America.

For over 10 years, Noel has been the first –choice goalkeeper for Honduras. Likewise, to reach a century of caps he became the third Honduran after Amado Guevara and all time top goal scorer Carlos Pavon of the Honduras. He was made the captain of the Honduran national team in 2010. In 2011 CONCACAF gold cup he was awarded with the title for Best goalkeeper. Noel  has a salary up to 2015 when his contract expires.

Lastly his achievements as an individual includes :

Best Goalkeeper Award :  He was awarded with Best goalkeeper in 2011 CONCACAF gold cup because of his excellent performance in the match.

Best Goalkeeper Award : Similarly, in 2006-07, 2007-08 he was again awarded with the best goalkeeper award of Lisa Professional de Honduras.