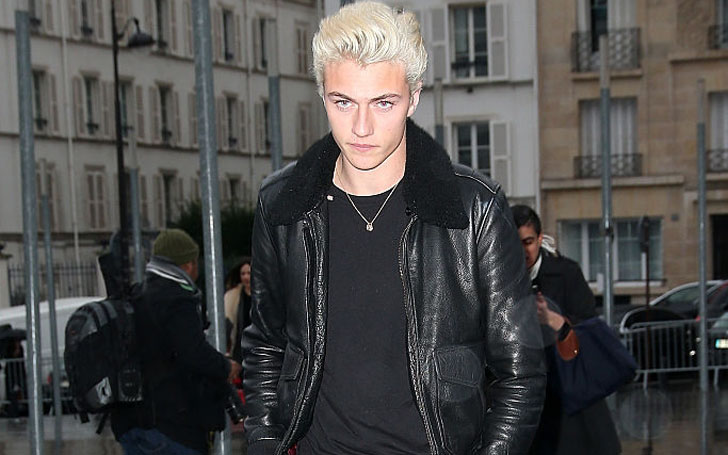 Popular for his signature platinum blond bleached hair model Lucky Blue Smith is one of the hottest models in the fashion world currently. He started his modeling career at the age of 12 and is still killing it on the ramp.

The fashion world hottie is currently dating the former Miss Teen USA, Stormi Bree. Smith and Bree are the hottest modeling pair in the fashion world. They have even done a Dolce & Gabbana show together during Milan Fashion Week. The pair's life got even better when recently they welcomed their first baby. We have all details about the couple here.

Nineteen years old Lucky Blue Smith is a dad now. Smith and his girlfriend, the former Miss Teen USA Stormi Bree, welcomed their first child together on 26 July 2017. They named their daughter Gravity Blue Smith. Lucky took to Instagram to share the good news to all his fans on Thursday.

He shared a black and white photo of him holding his newly born daughter and he expressed his happiness writing:

"She's here?????? meet Gravity Blue Smith, I've never felt so happy... I love you more than anything in this whole world little princess"

Not only the dad, Gravity's mom also shared her happiness on her Instagram and she shared an even cuter picture writing:

"Welcome to the world little angel, the most perfect beautiful gift I could have ever dreamed of ??little miss Gravity Blue Smith"

Lucky announced that they are expecting their first baby through Instagram in early March. He shared a cute picture throwback picture in which Smith and Stormi appeared embracing and wrote:

"Hey guys I just wanted to let you in on an important part of my personal life. I have some wonderful and surprising news - Stormi and I are having a baby! It's crazy to see how my life has been so blessed. I'm so happy and can't wait to experience this amazing journey!"

Bree also shared about her changing figure during her pregnancy period. In one of her post on May she wrote:

"This has been the hardest, most beautiful, happiest, saddest, scariest, most empowering, simple, but entirely complex, amazing journey I've ever been on in my entire life."

In an interview with Harpersbazaar in March, Smith also shared about his happiness of being a father. He said:

Smith first officially confirmed his relationship with Stormi in an interview with Evening Standard magazine in October 2016. He also posed for a series of sailor-themed photos for the magazine. At that time, Lucky disclosed who he is in a relationship. He said:

"She's a musician and she models on the side,"

This is such a cute story, and now with a baby on board, it's become even more adorable!