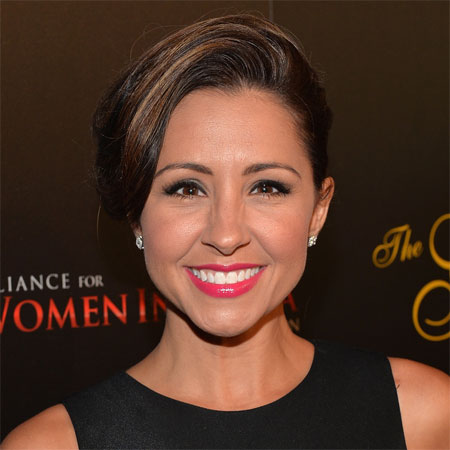 The American actress-singer and songwriter, Nikki Boyer is better known for the 2016 American web TV series ‘Gilmore Girls: A Year in the Life’ and a 2008 teen drama TV series ‘90210.’ She was the host of Yahoo!’s ‘Daytime In No Time’ and co-host of Watch This! on the ‘TV Guide Channel.’ She is also a former active member of The Spirit Theory and performed as a singer in the group.

She has been married to her boyfriend, David Denman, an American film and TV actor. The couple got married in 2001, in an intimate ceremony in the presence of their families, close friends, and relatives.

Born on July 22, 1975, in St. Louis, Missouri, USA, actress Nikki Boyer spent most of her childhood days in St. Louis along with her parents.

Boyer belongs to American nationality and regarding her ethnicity, Boyer is a White American. She attended Webster University and earned her BA in Media Communications with an emphasis in Broadcast Journalism in 1997.

At the time, Boyer built skills and trained herself in the field of journalism at Webster, but she was never able to become a formal broadcast journalist.

Following her graduation, Nikki Boyer went to Los Angeles, California in 1998 and pursued her career as a singer with The Spirit Theory. In 2003, she became a host of TLC’s reality series ‘Perfect Proposal.’

After working for a couple of years in the series, Boyer began working as a co-host of Watch This! on the 'TV Guide Channel,' in 2007. She released her latest album, ‘Underlying Poetry’ with her band The Spirit Theory in 2008.

Boyer is currently performing with ‘The Cardboard Cutouts.’ She also hosted Yahoo TV’s ‘Daytime in No Time,’ before becoming a co-host of Yahoo TV’s ‘What’s so funny?’ for a short time. Besides, she also featured in web TV series, including ‘Coyote County Loser’ and ‘90210.’

In 2016, Boyer appeared in ‘Gilmore Girls: A Year in the Life’ alongside Lauren Graham, Alexis Bledel, and Scott Patterson. She also has a self-titled YouTube Channel with above 97K subscribers, as of December 2017. She created the channel on March 29, 2012.

The American actress and singer-songwriter Nikki Boyer is also YouTube star. Boyer is living a luxurious life and has also earned a huge amount of money from her various professions like acting, singing, and as a television presenter.

However, Boyer has not revealed her actual amount of net worth in the social networking sites. She is also popular on her self-titled YouTube Channel, where she has more than 97K subscribers, in 2017.

The 42 years old, Nikki Boyer is a married woman. Boyer was married to her boyfriend, David Denman who is an American film and TV actor. The couple got married in 2001, in an intimate ceremony in the presence of their families, close friends, and relatives.

However, Boyer and her husband, Denman divorced after a decade of their marriage without sharing any children. Currently, Boyer is not dating anyone officially. In an interview, she was seen hanging out with CJay and kissing him. But, there is not any public announcement about their affair.

The actress is also active on Twitter where she has 14.9K followers, as of 2017. Besides, Boyer is an avid lover of the animal as she has posted numerous pictures of a dog on her Twitter.