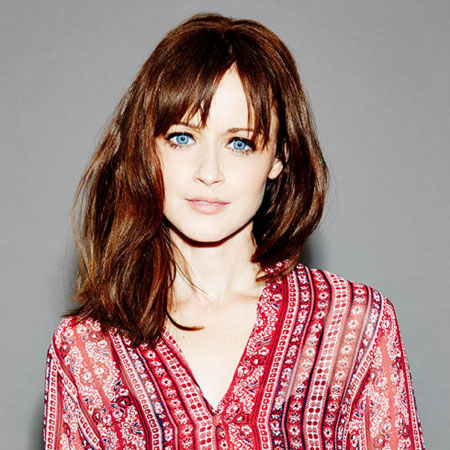 Alexis Bledel is a popular Hollywood actress and model who is best known for her role as Rory Gilmore in the hit television series titled Gilmore Girls.

Alexis Bledel was born as Kimberly Alexis Bledel on 16th of September, 1981 at Houston, Texas in the United States of America. She was born to Nanette and Martín Bledel. She has a younger brother named Eric. Alexis is an American by nationality and ethnicity wise she considers herself as a Latina.

Alexis Bledel went to a catholic school, St. Agnes Academy, located in Houston. As her family member spoke Spanish, she didn't learn to speak English until she was at school.

Alexis was quite shy as a child so her mother encouraged her to join Community Theater. In her childhood years, Alexis Bledel appeared in ‘Our Town’ and ‘ The Wizard of Oz’  which were the local production.

As she grew up, Alexis Bledel was given work as a fashion model after she was scouted at a shopping mall. Then she joined Page Parkes Center for Modeling to pursue her modeling career. After that, she also went to the New York University's Tisch School of the Arts where she studied Film.

Alexis Bledel got a breakthrough when she got a chance to make a debut as Rory Gilmore in WB comedy-drama series, Gilmore Girls. She got the first taste of stardom after she made an impressive performance in the series. After that, she got a chance to work in other movies including Tuck Everlasting (2002) and Sin City (2005).

Other amazing roles Alexis Bledel has portrayed are in Sisterhood of the Traveling Pants and Violet and Daisy. Alexis Bledel has also featured in The Conspirator (2010) which is a historical drama directed by Robert Redford. Other movies she has worked in are The Brass Teapot and Parts per Billion.

She made it big again in 2012 when she landed up a role in the AMC hit series titled Mad Men.

Alexis Bledel met her future husband on the sets of AMC hit series Mad Men. They started dating in 2012 and after a long affair, they decided to get married in June 2014.

Standing at five feet and seven inches above the ground, Alexis Bledel is a tall lady. At 35 years of age, she looks amazingly pretty with brown colored hair and blue colored eyes.

Alexis Bledel has earned a lot of name and fame working in the field of Television and movies. She has acted in Hit television series and movies which make her profile very strong. According to sources, her net worth is estimated to be around $8 Million.