Nik Hirschi is an Australian-born business personality and former banker. He is most known as the husband and managing partner of social media personality and presenter Alexandra Mary Hirschi AKA Supercar Blondie.

How Old Is Nik Hirschi?

Nik Hirschi is perhaps most known to the world as the husband of Alexandra Mary Hirschi, known ubiquitously as Supercar Blondie. Supercar Blondie is a social media personality, presenter, and automobile enthusiast. The couple is based in Dubai, United Arab Emirates, where Supercar Blondie made a name for herself vlogging exclusive reviews of high-end automobiles. What Does Nik Hirschi Do?

Nik Hirschi is a former banker. He was an apprentice at Valiant Bank AG in Switzerland and worked as a summer intern at Standard Chartered.

He left banking when he met and fell in love with Alexandra Mary. Besides being her partner in life and marriage, Nik Hirschi is also Supercar Blondie's partner in business. Since April 2018, Nik has been a managing partner at Supercar Blondie, handling talent management, public relations, business development, and strategy. 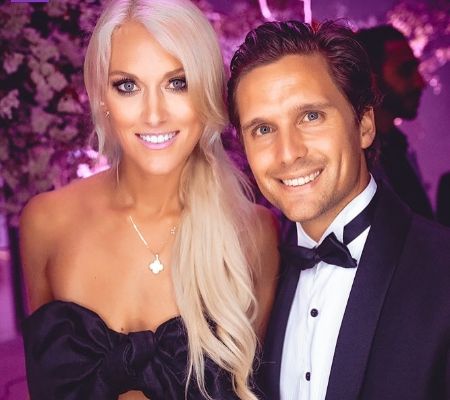 The couple secretly got married a few years back and currently resides in Dubai, United Arab Emirates. Sometimes Nik steps out from behind the shadows and appears alongside his wife presenting high-end and cutting-edge cars and automobiles.

Like his wife, Nik Hirschi is also a social media influencer but to a lesser extent. He is on Instagram under the handle @nikcars and has over 500k followers.

According to various sources, Nik Hirschi is believed to have a net worth of around $2 million as of March 2021. In contrast, Supercar Blondie reportedly has a net worth of $15 million. The couple mainly earns from social media which includes promotion, sponsorship, and advertisements.

There is no doubt that the couple is obsessed with cars. When asked about how many cars do they own, Supercar Blondie stated not as many as we can think of:

"Not as many as you think! A lot of people think I own all of the cars on my Instagram. I recently sold my Lamborghini Huracan just before we went into lockdown, so I didn’t actually have a car at all for three months. But I just got the new Rolls-Royce Wraith Black Badge. And I also just got a new car delivery that we were filming today… a McLaren 720S. We also put a deposit down on a Tesla Cybertruck, but that won’t be out for a year or so. And I’ve also got my eye on this 6x6 – it’s like a custom-made Jeep they make in Florida. The back two wheels actually run on a battery using electric power and the other four are from the standard engine, so it’s a little bit different." 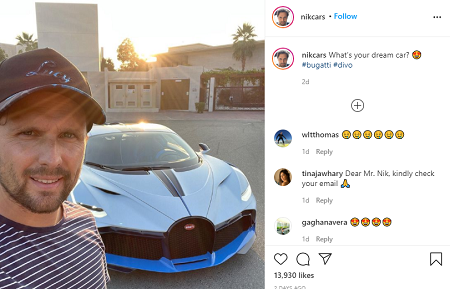 CAPTION: Car obsessed Nik Hirschi posted about his dream car which is a Bugatti divo that costs around $5 or more million on his Instagram for his more than 500k followers SOURCE: [email protected]

Mary recently bought McLaren 720S which costs around $292,961. Recently, Nik also posted about his dream car which is a Bugatti divo that costs around $5 or more million.