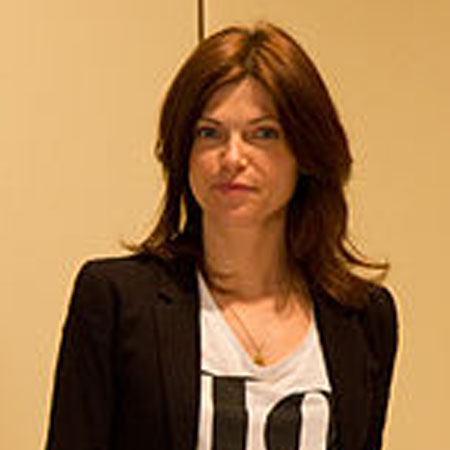 Nicole De Boer, a Canadian actress as well as a model, is best known for portraying the role of Ezri Dax on the final season of science fiction television series, Star Trek: Deep Space Nine from 1998-1999.

Boer debuted in the television industry from a TV movie Freddy the Freeloader’s Christmas Dinner when she was 11. She is also well known for playing the role of Sarah Bannerman on the American/Canadian science-fiction drama television series, The Dead Zone (2002-07). In 2016-17, she appeared in a drama series Private Series.

Regarding her personal life, Boer was previously married to her ex-husband, John Kastner with whom he shares a child, a daughter.

Nichole de Boer was born on 20th December 1970 in Toronto, Ontario, Canada. She is known as Nikki de Boer. Her last name "Boer" means 'the Farmer' in Dutch which is a very common last name in the Netherlands.

Boer belongs to White-Canadian ethnicity and holds a Canadian nationality. She was interested in acting since her childhood days.

Nicole de Boer began her acting career since her childhood days. At the age of seven, she got a lead role in a school play, The Wizard of Oz. Soon after in 1981, Boer got an opportunity to feature in the Christmas special TV movie Freddy the Freeloader's Christmas Dinner starring Red Skelton and Vincent Price.

In the year 1988, Boer appeared in the television series 9B as Erin Jones which was aired on the CBC channel. The next year, appeared in The Kids in the Hall as Laura for two years(1989-91). The series starred Dave Foley, Scott Thompson, and Bruce McCulloch.

During that year, she has also appeared in The Kissing Place as Cathy. Later she has appeared in other television series and movies such as Prom Night IV: Deliver Us from Evil, The Counterfeit Contessa, Ties That Bind, Forever Knight, The Outer Limits, Deepwater Black and more.

In the year 1989, Boer appeared on the science fiction television series, Star Trek: Deep Space Nine as Ezri Dax. After playing in these series, Boer came into limelight.

In 2003, Boer appeared in the Canadian film Public Domain. She then appeared in other movies and TV series like Phil the Alien, NYC: Tornado Terror, Metal Tornado, and Haven. Since 2016, she is working in a TV series Private Eyes as Becca Dorsay with Jason Priestley, Cindy Sampson, and Jordyn Negri.

The Dead Zone actress, Nicolo de Boer earns lots of from her acting career, However,  her net worth might be in a million but Boer has not revealed her exacted net worth till date. As per some other source, Boer has a net worth of around $4 million.

And as a professional model, Boer's annual salary is over $72,000. According to some online sources, a TV star earns an average salary that ranges from $150k to $1 million.

Nicolo de Boer is a divorcee. Previously, Boer married her boyfriend turned husband John Kastner in December 1999 in a private ceremony attended by families and friends.

Gorgeous day at #thegetty with my girl

The couple has a daughter together Summer Lee Kastner who was born in January 2007. After living together for over one decade, they divorced in 2012 for some undisclosed reasons.

Boer's ex-husband John Kastner is a Canadian musician and composer who is well known as the singer for Montreal hardcore punk band the Asexuals and singer-guitarist for Montreal alternative band Doughboys and alternative band All Systems Go! Boer spends lots of her time in Loss Angels and Toronto.

After her divorce, Boer is not spotted with anyone on romantic dates and also has not introduced anyone as her boyfriend, so as of 2018, she might be possibly single. Moreover, she is living a happy life with her daughter.

Check out the interview with Nicole de Boer: