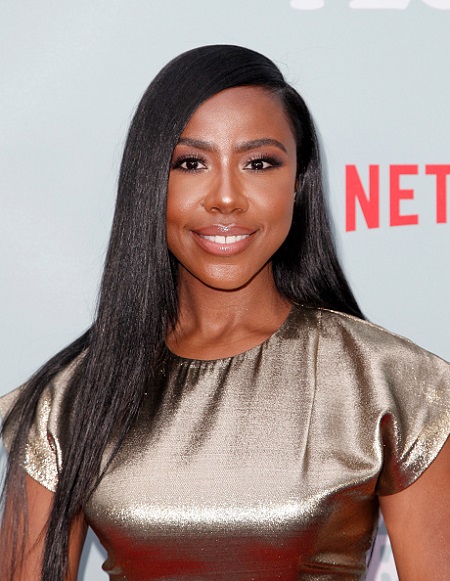 Nia Jervier is an American actress, model as well as producer who is famous for appearing in the Netflix series, Dear White People. She is also known for appearing in Netflix movie Step Sisters.

Nia Jervier was born on June 7, 1981, in Brooklyn, New York, but later on, moved to Los Angeles. She is of American nationality and Afro-American ethnicity.

Regarding education, she enrolled at The New School’s Dramatic Arts to focus on BFA program, and, later on, joined La Guardia Performing Arts High School.

Touch-ups on the set of Lady Like. #fbfriday #blackgirlmagic #trinigirls #ladylike

In the year 2018, she reprised her appearance in the series Dear White people where she has said,

The best thing for me would simply have to be that I get to play Kelsey, who wasn’t in the movie. Being given the opportunity to play a fully fleshed out role in a greater capacity means the world to me. I am so proud to be a part of such a groundbreaking project. It’s a movement. I love being a part of this show! Saying I’m extremely grateful for this moment would be putting it lightly.

In the movie Step Sister, she appeared alongside Eden Sher.

Apart from acting, she is also interested in interior designing and also owns a boutique company, House of Jervier.

Nia Jervier has a net worth of around $600 thousand which she collected from acting as well as designing career. An average salary of an actor is around $50,000 so she also might be earning in the same range.

The 38 years old, Nia Jervier doesn't seem to be involved in a dating relationship currently. To this, she has not been rumored to have an affair with any guy or neither married to anyone.

It seems like she is a very private person when it comes to sharing her personal life. Similarly, while viewing her in her social media platfrom, she seems to be focusing on her career as she can be seen sharing her acting shoots.