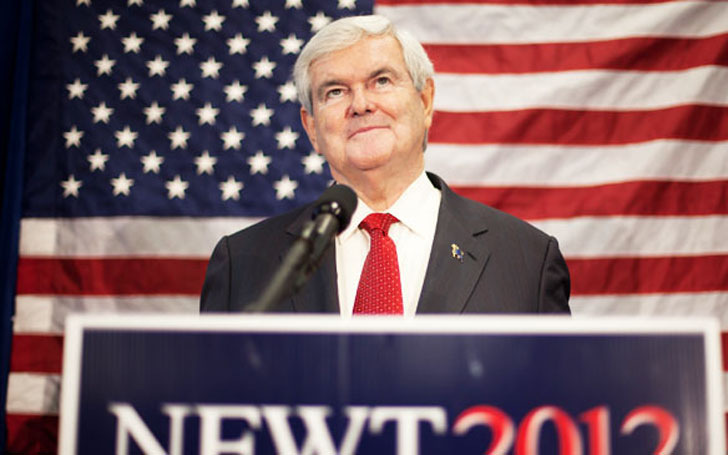 Newt Gingrich, the former Georgia speaker for the United States House of Representatives and 2012 Republican presidential candidate has been married multiple times. We know he's always in news these days, but it's his married life we are discussing here!

You'd be surprised to hear Gingrich's quite polygamous life. We have all the details here!

The popular politicians’ personal life is as much eventful as his professional life. He has married thrice in his lifetime and he has two daughters. He is currently married to his third wife Callista Gingrich.

The couple has been happily married for last 17 years without any divorce rumors. According to a source, the duo started an affair in the early 1990s while Newt was married to second wife Marianne Gingrich. In 1999, he divorced Marianne and after a year he got married to Callista. Callista was a major presence during Gingrich’s 2012 presidential campaign. She currently serves as the president of their production company, Gingrich Productions. It has made several documentaries and historical such as Ronald Reagan: Rendevous with Destiny, Divine Mercy: The Canonization of John Paul II.

Callista is also successful children’s book author, penning a series of books about Ellis The Elephant. They occasionally appear in public events together.

Brief History of Gringinch's Past Marriages

Newt married Jacqueline May Battley in 1962. She was his former high school teacher, notes a 1995 Montgomery Advertiser report. He was 19 and she was 26 when they got married.

They had two daughters together- Kathy Gingrich Lubbers and Jack Gingrich Cushman. The pair, unfortunately, got divorced in 1981, while she was recovering from cancer surgery. Jackie died at the age of 77 in 2013.

Six months after Gingrich’s first divorce, he married his Marianne Ginther, a congressional aide who Gingrinch started dating even before his divorce.

Gingrich and his second wife, Marianne

The couple stayed married for 18 years before getting a divorce in 2000. Newt divorced her due to his affair with  Callista since a long time, she went on to become his third wife. Newt doesn't have any children with his second and third wife.

'Technically, the President of the United States cannot obstruct justice," He said at the National Press Club in an event to promote his new book, ‘Understanding Trump’.

Gingrich, however, himself voted to impeach a president over such charges. While speaker of the House, he voted in 1998 to impeach former President Bill Clinton on charges of Obstruction of Justice and perjury.

Now, with a Republican in power, Gingrich seems to have changed his voice. Gingrich was a vocal advocate for Trump during his campaign and at one point he was considered for the Vice President slot. But Trump picked another Republican, Mike Pence, for Vice President.