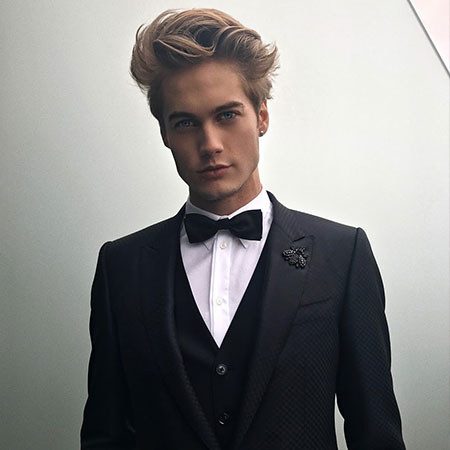 Neels Visser is an American-based model and aspiring DJ who rose to fame from social media. He even runs his own fashion portal by the name Living Regal. As a model, he was able to work with big famous brands like Dolce & Gabbana, Vanity Teen Magazine, American eagle, and Maybelline.

Neels Visser was born on September 26, 1998, in Phoenix, Arizona, USA under the birth sign Libra.

He was born in Phoenix, however, grew up in Los Angeles, California as his parents relocated there after his birth. He has a sister named Kendall Visser.

He went to Corona Del High School in California. He was a good student and was quite active in extracurricular activities.

Neels Visser began his career as a model from an early age. Because of his charming face and well-sculpted physique, he quickly became an absolute favorite. Neels' sister has her own modeling agency and the sibling duo has worked together.

While modeling he was able to work with famous brands like Dolce & Gabbana, Vanity Teen Magazine, American Eagle, and Maybelline.

Besides modeling, he also tried his luck in acting. Some of his works on television are in ERDEM x H&M: The Secret Life of Flowers of 2017, ZAYN: Pillowtalk Parody in 2016. He is also the owner, founder, and CEO of Living Regal, which is an online clothing retail website targeted to the trendy and classy dress.

He also has his self-titled YouTube channel created on March 1, 2015. His channel is filled with his personal vlog. As of February 2019, he has about 480k subscribers with a total view of 2,983,069. The most recent uploaded video was 2 months ago titled ‘My first fragrance launch!!’ with the total view of 78k.

Neels has a net worth of $500,000. His main source of income is his modeling career and clothing line. In addition, he also earns from YouTube and Instagram.

Neels Visser is probably single at the moment. He usually never talks about his relationship to the media so there are no details about his current girlfriend. However, in the past, he was having an affair with an Instagram model Cindy Kimberly. They began dating in 2016, but their relationship couldn’t last for long and they split after two years in 2018.

You Might Be Interested: Have you got any idea about the rumor of Justin Bieber and Cindy Kimberly?

He was also rumored to be dating Alisa Violet who is a model and social media star, but the alleged couple never addressed the rumor.

Neels loves to spend his time with his friends and loves to go to different new places. He is a close friend of Lucky Smith; a model, Madison Beer; a musician, Jake Paul; YouTuber and actors, Lele Pons, Jay Alvarez, and Tatiana Maya.

All blue, feeling ready for the new year Wearing my @danielwellington watch which makes the perfect gift. peep their collection & shop the final days of their holiday sale w/ the link in my bio #danielwellington #dwforeveryone #ad