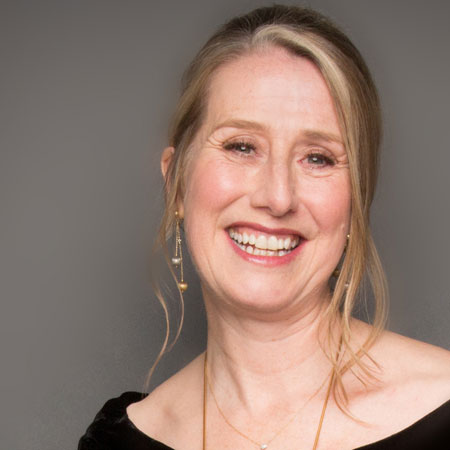 Neasa Hardiman is a BAFTA-winning Irish director. Some of her most famous works include Happy Valley, ABC Marvel series Inhumans and Z: The Beginning of Everything.

Hardiman is set to make her feature film debut with her own screenplay 'Sea Fever', a project under production. She is happily married with kids and resides in Dublin with her family.

Neasa Hardiman was born and raised in Dublin, Ireland. She is Irish/British by nationality and belongs to Caucasian race/ethnicity.
Hardiman waitressed in Berlin while she was there for her Master’s degree. ‘’I was terrible at it. And a lot of people are very rude to waitresses, I discovered’’-she explained the waitressing experience as her worst job to Independent.ie
She has many degrees to her name including a Double First Bachelor of Design from the National College of Art and Design in Dublin. Hardiman also holds a Master's degree in visual communications from University of the Arts in Berlin. She earned a Ph.D. in film studies from Trinity College in Dublin and a master's degree from the NCAD Dublin in Aesthetics and Politics.

Neasa Hardiman did most of her early works with RTÉ network in Ireland. She became the youngest ever director of the longest-running soap opera in Ireland, Fair City in 1998, Hardiman also produced and directed over twenty documentaries and many entertainment shows including Eurovision Song Contest's Irish broadcast with the network.
Hardiman was one of the directors of the 2004 documentary film Imagining Ulysses based on the theme of Irish novelist James Joyce's seminal novel. From 2010 to 2012, Hardiman worked as the lead director on Tracy Beaker Returns, a BBC children's drama series that won the British Academy Children's Awards in 2010 for Best Drama.

She then went on to direct Holby City, BBC1 hospital drama's four episodes aired between 2012 and 2013 including two episodes of Casualty which was loosely based on Holby city. Hardiman started directing episodes of In the Club in 2013, and after completing her work on the series, she directed two-part fourth series finale of the 2014 ITV crime drama Scott & Bailey produced by Red Production Company.

Hardiman directed the second series of Happy Valley-a BBC and Red Production Company’s joint venture- along with Sally Wainwright, the series’ creator and executive producer, it aired in 20146. The series stars Sarah Lancashire, James Norton and Siobhan Finneran among others.

Neasa Hardiman received a production loan from the Irish Film Board to turn her self-written script Sea Fever into a feature film, as announced in January 2017, this will be her feature film debut; the movie is currently under production.

Neasa Hardiman is a BAFTA-winning director from Ireland, a list of her most noteworthy awards and achievements to date:

Neasa Hardiman is married with Children. She often talks about her husband and children in interviews- in a 2017 interview with IFTN, while talking about her BAFTA win, she mentioned her husband, ‘’Well I was delighted to win a BAFTA for ‘Happy Valley’ while I was in Hawaii. My husband phoned me at nine o’clock in the morning to go, ‘You’ve just been on television! You’ve just won a BAFTA!’’’
Hardiman met her husband in the nineties. They have school-going children, and as per Hardiman, her children’s education is the most expensive thing she’s bought apart from a property. She believes one should invest in experiences, not objects.

Neasa Hardiman is a BAFTA-winning director still active in the field with over a decade of experience and commendable net worth, at least $1 million, most likely-however, there have been no public records of the exact figure.

Hardiman’s feature film project ‘Sea Fever’ received €700,000 in funding from the Irish Film Board, the screenplay for Sea Fever has already won Best Screenplay prize at the London Film Awards.

She says one of her biggest mistakes was buying an expensive dress to wear it only once and leave it in her wardrobe to gather dust. Hardiman has a house in Dublin; she says purchasing the home before the property boom hit was her best financial killing.

Hardiman had an iPhone and started out as a designer using Mac in the Nineties.

The Happy Valley director says there’s not enough money in her bank. However, she’s thankful that she’s never had to make an insurance claim till date. Hardiman buys books online, a lot! And, uses both Spotify and iTunes.

Neasa Hardiman wants to buy Irish property but thinks finding an affordable house in Dublin’s city center is hard. She and her husband have a variable mortgage that’s come close to an end.