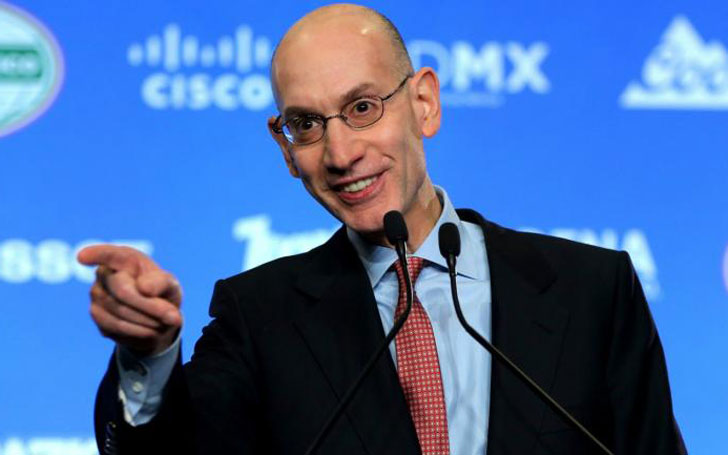 How do you describe falling in love for the first time? For the lawyer and commissioner of NBA Adam Silver, "he got lost but in a good way."

Silver is a family man. He has been married to Maggie Grise since 2015. They are living a blissful family life along with a daughter Louise Burns Silver.

Adam Silver and his wife of three years, Maggie Grise were first introduced by a mutual friend. As mentioned earlier, it was a love at first sight. The couple got married in May 2015.

The 55-year-old commissioner of the National Basketball Association (NBA) announce the news of his wedding day in an interview with Today in April 2015 and also relieved that he wants to have a child. Adam Silver is married to Maggie Grise since 2015

"My fiancée and I would love to have a child,"

Silver's dream to have a child came true after two years. The couple welcomed their first child, a daughter Louise Burns Silver in 2017.

The pair has kept their married life under the radar: They were last spotted together at State Dinner at the White House on March 10, 2016, in Washington, DC.

Back in April 2014, the commissioner of NBA Silver banned real estate billionaire Donald Sterling who is Los Angeles Clippers owner for racist comments.

He established an inquiry about Sterling's racist comments which was recorded a leaked recording and was “contrary to the principles of inclusion and respect that form the foundation of our diverse, multicultural and multi-ethnic league”.

During a news conference in New York, he said:

"We stand together in condemning Mr. Sterling's views. They simply have no place in the NBA,"

Silver also fined Sterling $2.5 million. This also compelled Sterling to sell his team which he owned since 1981. Due to his courage, he was praised by players, owners, and many fans.