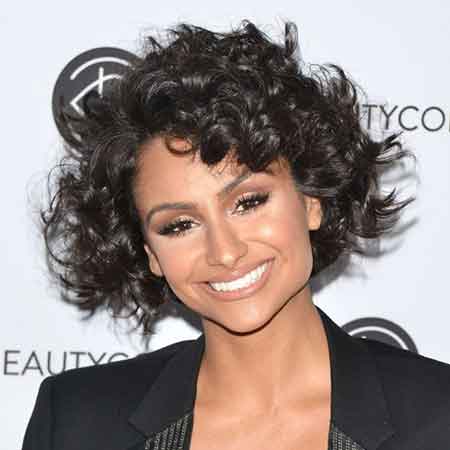 Multitalented model, singer as well as an actress Nazanin Mandi stands out by virtue of her talent and determination. She received awful attention and earned a lot of fame following her finest performance on American Idol, Rock Star Academy, and Next Big Star. A native of California, Mandi has also worked for a number of top-rated publications and premium brands as a model. She is yet to be married but is in a relationship with her longtime love Miguel Jontel Pimentel.

Nazanin Mandi was born on September 11, 1986, in Valencia, California, United States, under the birth sign Virgo. She belongs to white-American ethnicity and an American nationality.

A versatile personality exhibited her talent in a various field from quite a young age as she started dancing and singing at the age of 3 and modeling at age of 10. And when she turned 15, she also started giving vocal performances at Carnegie Hall.

Nazanin Mandi kick-started her modeling career after a photographer discovered her at a run off the mill In-n-Out store and was later signed by the elite Wilhelmina Models. For her striking good looks, she grabbed a huge attention within a short time.

Since the start of her career, Mandi has graced the pages of numerous reputed publications like Vogue, Allure, GQ India, Sports Illustrated, Maxim, Cosmo Girl Magazine and Seventeen Magazine. She also modeled for several brands including Smashbox Cosmetics and Microsoft.

Mandi also became a finalist on Next Big Star. She also performed in the reality talent competition, Are You The Girl. She appeared on Disney Channel's, feature family comedy, That's So Raven alongside Raven-Symoné, Orlando Brown, and Kyle Ma s sey.

Besides, the actress also can sing in 5 different languages.

Nazanin Mandi's Net Worth And Salary

Nazanin Mandi's exact amount of net worth is yet to be disclosed but estimation made by various online sources a s sume it to be more than $1.5 million.

Mandi has worked as a model for several top-rated publications as well as premium brands. And as a model, Mandi's estimated annual salary is around $276,831.

Nazanin Mandi is not married yet but is in a long-term relationship with her boyfriend, Mexican singer Miguel Jontel Pimentel. The couple started dating in 2006 and have been together ever since.

The couple got engaged in January 2016. The engagement rumors sparked after she subtly revealed an enormous diamond ring on her finger.

Manda also featured in his music video for Do You. She and her longtime love made their appearance together in Music award ceremonies and Hollywood parties too.