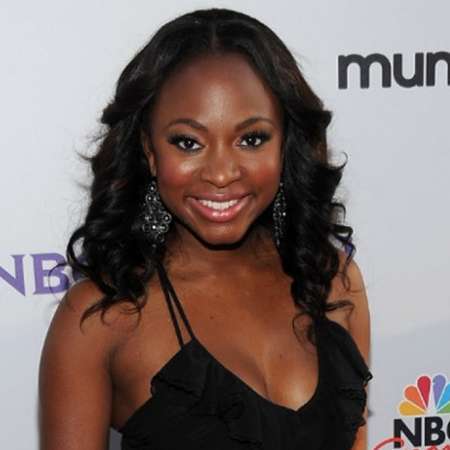 Naturi Cora Maria Naughton, popularly known as Naturi Naughton, is an American singer-songwriter, rapper, and an actress. She sings in the R&B and hip-hop genres. She is known as an actress from her roles in Fame, Notorious, and The Playboy Club.

Naturi Naughton was born in the year 1984 May 20, in East Orange, New Jersey. She was born and raised there. She is a daughter of Brenda, a part-time paralegal and Ezra Naughton, a retired accountant. She used to sing from the church choir at New Hope Baptist Church from where her interest went on music.

Naughton attended St. Joseph’s Catholic School. Afterward, she attended Immaculate Conception High School where her musical talent was discovered and recognized. She has attended Seton Hall University majoring in political science. Regarding her ethnicity, Naughton is Afro-American and belongs to the American nationality.

Naughton used to sing the national anthem at various events in New Jersey. She has won the 2011 Rising Star Award.

Naturi Naughton appeared in several movies and television drama series as well. Among which made her popular is from her role as Kendra in The Client List. Her recent television series is Power where is playing the role of Tasha St. Patrick and she is appearing in the supporting role in that series.

Besides, she is also known for her role as a Playboy Bunny mistress in the award-winning AMC Television series called "Mad Men".

Naturi Naughton joined with Adrienne Bailon and Kiely Williams to form the group 3LW at the young age of 15 in 1999. The group released their several albums where their first album was “No More (Baby I’ma Do Right)” in 2000 which was the biggest hit. Their fame began to flourish all over the world making the group to go on tours for their performance.

But in 2002, the group got disbanded. Whilst working for fame, a musical drama, she has given her voice in five soundtracks which were released in 2009. Along with her singing career, she had carried her acting work as well.

Throughout 2005-2008, Naturi Naughton played in the Tony Award-winning musical called Hairspray as Little Inez. Since then, the door in the acting field of the entertainment arena opened for her.

The actress has been playing the role in the series Power since 2014 along with Omari Hardwick, Joseph Sikora, Lela Loren, Shane Johnson, and Jerry Ferrara.

Naturi Naughton's Net Worth And Salary

Naturi Naughton's net worth is $800 thousand USD at present. She has earned a decent amount of salary from her career as an actress and singer-songwriter.

Her television appearances include Queen of the South, Power, Let's Stay Together, The Client List, and Mad Men.

Being a famous star, she has lots of fan following and has maintained a very appreciable net worth of her life. The amount surely pays off the talent that she has given to the entertainment world.

She is active in social sites. Her fans can follow her @naturinaughton on Twitter and get updated about her recent activities.

Naturi Naughton is yet to be married but has a child, a daughter with her ex-boyfriend Ben. The couple welcomed their child on July 19, 2017. They dated for a few years before their broke up in the year 2019.

Naughton is a rising star in the Film/TV industry. She is a hard-working one. Talking about her personal life, she is still single. She is enjoying her single independent life to the fullest. She has never been married.

However, at last, she had affairs. She had dated Jamal Woolard who is an actor and a singer named Boog. Her love relationship with the then boyfriends of her did not last long.

Natur has a perfectly sexy body. Her body measures the size of 34-24-34 inches. Naturi Naughton has beautiful long and toned legs.

Naturi Naughton has maintained her figure being conscious on the intake of food and doing exercises to keep her fit. So far she has not gone through any plastic surgery but in some of the sites, there is information that she did the surgery of her breasts. There are lots of her hot pictures available on the internet along with the information regarding her life and career.