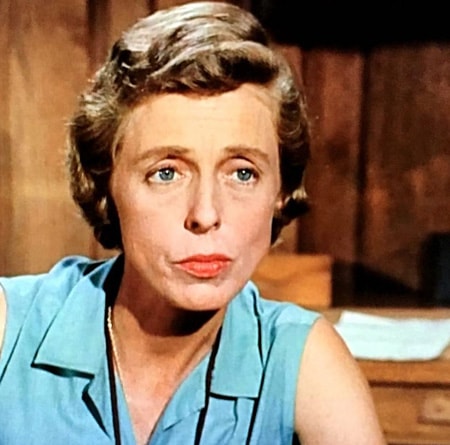 American born Nancy Kulp was an American character actress who rose to fame after playing the role of Miss Jane Hathaway on the CBS series The Beverly Hillbillies. She is also famous for her portrayal of May Hopkins on the sitcom Sanford and Son. The gorgeous actress worked in the American film industry for nearly four decades before her death in 1991.

Nancy Kulp was born as Nancy Jane Kulp on August 28, 1921, in Harrisburg, Pennsylvania. She was born as the only child of father Robert Tilden Kulp and mother Marjorie C Snyder. Her mother was a teacher at a local school who later became a principal, and father was a traveling salesman.

Kulp joined the women's branch of the United States Naval Reserve during the World War II era. She was promoted to the rank of lieutenant, junior grade during her service. She retired from the service in 1946.

Kulp's acting career began after her marriage to Charles Malcolm Dacus. He relocated to Hollywood following her marriage where she worked in the MGM's publicity department. She decided to pursue an acting career after director George Cukor convinced her to do so.

Kulp debuted in the big screen from the 1951's The Model and the Marriage Broker, in which, she played the role of Hazel Gingras.

Kulp primarily worked on films in the 60s during which she worked in the comedy films Strange Bedfellows, The Patsy, and Who's Minding the Store. She also played in the adventure flick The Night of the Grizzly.

Kulp also worked in dozens of television series in the guest role that included Password, The Love Boat, Fantasy Island, Petticoat Junction, and Quantum Leap among others. She had a recurring role in The Brian Keith Show, Sanford and Son, and The Bob Cummings Show.

Moreover, Kulp was also active in theater works. She had performed on stage in the production of Morning's at Seven, in which she played as the replacement for Elizabeth Wilson.

For work extraordinary performance in The Beverly Hillbillies, she was nominated for Outstanding Supporting Actress in ‘Primetime Emmy Award’.

How Much Nancy Kulp Worthed At Her Death?

Who Was Nancy Kulp's Husband?

Nancy Kulp was married to Charles Malcolm Dacus. They tied the knot on April 1, 1951, in Dade County, Florida. They moved to Hollywood after their marriage where Kulp started her acting career.

After around a decade of their marriage, the pair divorced in 1961. Following her divorce, Kulp didn't marry again. Moreover, her other relationships are also not known.

Kulp retired from acting in 1989, after which she moved to Connecticut and then to Palm Springs, California. In the last few years of her life, Kulp was greatly involved in charity works. She was involved with the organizations like Humane Society of the Desert, the Desert Theater League, and United Cerebral Palsy.

According to some online sources, author and homosexual activist Boze Hadleigh said the late actress had indicated that she was a lesbian in an interview with him. However, none of the official sources have confirmed the news.

Actress Nancy Kulp died from cancer on February 3, 1991, in Palm Desert, California at her friend's house. She was diagnosed with cancer in 1990. She underwent chemotherapy, however, it spread so rapidly in her other body part. As a complication of the disease, Kulp died in 1991. Later on, Nancy was buried at the Westminster Presbyterian Cemetery.