Canadian-born American actress, Nanci Chambers is famous for her versatile acting and dynamic personality in the Hollywood industry. She has left a mark to all of her fans and support with her appearance in The Stranger I Married, Code 11-14, JAG and many others. Apart from this, she is also known as the wife of a Canadian actor, David James Elliott.

Nanci Chambers spent her childhood days in Thunder Bay, Ontario, Canada after being born on October 1, 1963. She has an American-Candian nationality and belongs to a white ethnical society.

Talking about her educational background, she went to Churchill High School in Thunder Bay, Canda.

The 55 years old, Nanci Chambers made her acting debut with the comedy movie, Screwballs in 1983. Prior to her debut, she has appeared in several movies and TV shows but her career took a breakthrough only after she appeared in the series JAG.

Apart from this, she is also known as the board member of a company named A Better LA. She is also an environmental conservationist who has learned about rainforest and tribes along with her husband staying in Ecuador.

The American-Canadian actress, Nanci Chambers' net worth is around $3 million which she has acc u mulated for more than a three-decade acting career. Similarly, she has also shared $15 million along with her husband, David James Elliott who is also an actor. So together the couple is enjoying $18 million.

An average salary of an actor is around $50 thousand per year, so Nanci also might be receiving her salary in the same range.

Well, the couple once sold their Palm Desert house for $1.1 million. Later on, they bought Brentwood compound mansion which they listed for sale at $9.85 million. Currently, the family of four reside in a rented home in Beverly Hills South for which they pay $35,000 per month.

The 55 years old, Nanci Chambers is living a blissful life with her longtime husband, David James Elliott. The pair secretly tied the knot in 1992 in a court-house, City Hall, L.A. due to a financial crisis.

After a year of marriage, the couple welcomed their first child, Stephanie Elliott(daughter) on March 15, 1993.

The couple, later on, decided to re-tie the knot in a grand wedding ceremony which was held in Santa Barbara, California on June 26, 1999, in front of 200 guests. On March 3, 2003, they welcomed their second child, a son, Wyatt Elliott.

Prior to this, she was married to a Canadian person but the detail about her first marriage and divorce is not yet available. 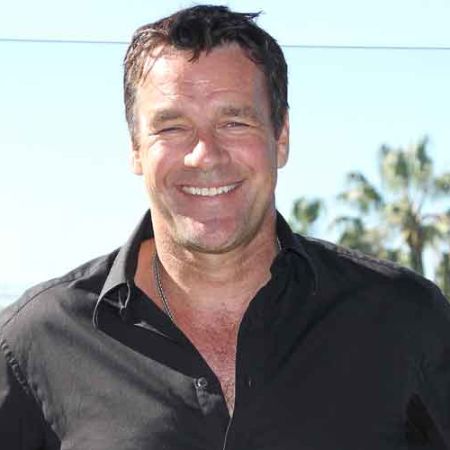