Musician Christopher Jarecki is happy with his 11 years long married life.Know about his wife & baby 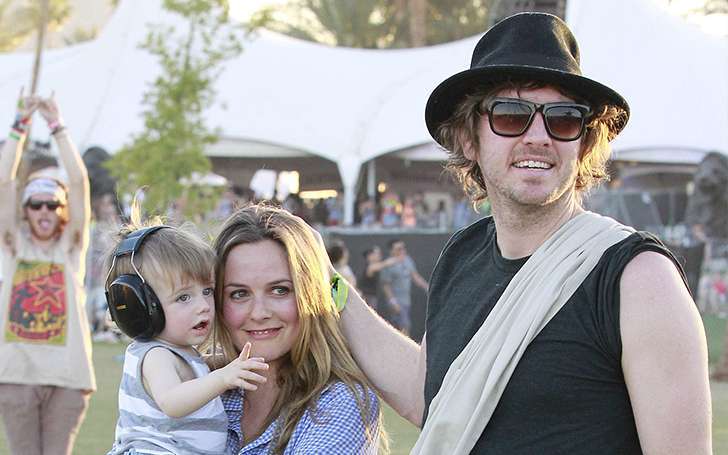 Christopher Jarecki, an American musician , radio host and, actor, is best known for his works as the lead vocalist of world famous punk band S.T.U.N. Christopher is married to a beautiful actress Alicia Silverstone.

The popular Singer Christopher is married to actress Alicia Silverstone. The couple has already celebrated one decade together. It seems that their relation is going well till now.

Christopher Jarecki and her wife Alicia Silverstone during their wedding ceremony

Furthermore, we have never heard about any complication in their marriage life. Christopher and Silver married on June 11, 2005. Roughly, 150 guests were invited to attend their marriage which was held on a rocky beach of Lake Tahoe,California. The groom wore a Parada suit with a vintage tie and also went barefoot, as cited by Celebritybrideguide.com.

From the source very close to them, the news came about the couple expecting a baby in January 2011. Later, in May of the same year,  Alicia gave birth to a baby boy, whom they called Bear Blu Jarecki. They are very happy being the parents of this child.

Who is Alicia Silverstone?

Alicia Silverstone, Christopher's wife is an American actress, producer, and activist. She debuted from the 1993 film 'The Crush'. She has appeared in several hit movies including 'Batman & Robin', 'Scooby-Doo 2:Monsters Unleashed'. Furthermore, she has featured in several TV shows and theaters.

This beautiful lady has also won several awards. She is very happy to get Jarecki as her husband. Apart from this, she is a vegan, who advocates for animal rights. If you see her social site, you can find her advocacy of animal rights.

Christopher is also a vegan and an animal lover. It is reported that he and his wife has four rescue dog, one of them, one which bulldog named 'The Pig'. He is very famous being the husband of actress Alicia Silverstone than his musical career.

Christopher was the lead vocalist of punk band S.T.U.N. He has toured in many places of countries with other members. This is a political noise-punk group also called 'Artist to Watch'. He also leads the Los Angeles- group 'The Bathroom Murders'. They released their first album Anarchiso in 2009

Currently, he hosts his own radio show 'A Musical Journey with Christopher Jarecki, where his special guests discuss five songs that reflect their personal musical history. The show is broadcast through GTFU radio.