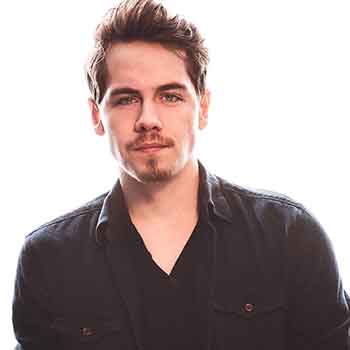 Munro Chambers is a Canadian actor who started his acting journey at the age of eight. He is, particularly, famous for his roles, Nate on Second Jen (2016–present), Eli Goldsworthy on Degrassi (2010-2015) and as Wilder in The Latest Buzz (2007-2010). For his performance on Degrassi: The Next Generation, he was nominated for Canadian Screen Award for Best Performance in Children's or Youth Program or Series. Furthermore, he was a nationally ranked trampolinist along with his twin brother Thomas Chambers.

Munro Chambers was born Munro Skylear Chambers on 29 July 1990 in Ajax, Ontario, Canada in a simple middle-class family to Scott and Lorette Chambers. He has a twin brother, Thomas Chambers who is two minutes older than him and is an actor too. He also has a younger brother named Michael.

Chambers along with his twin brother attended a local high school named Newmarket High School in Newmarket, Ajax along with Charlotte Arnold who is famous as Holly J. Sinclair in Degrassi- The Next Generation.

As of 2018, the twin brothers are studying at the University of Ontario. He was interested in music and acting from the young age.

Chambers started his career when he was just eight years old. He played a secondary role of Robin the television series Little Men. He then appeared in the children fantasy movie A Wrinkle in Time as Sandy Murray and Good Fences as Billy in 2003.

Afterward, Chambers played Max Shaw in the movie Godsend in 2004 alongside Rebecca Romijn,  Robert De Niro, Cameron Bright. Similarly, in 2004, he appeared in the television series, Still Game where he portrayed the secondary role of Jack along with James Martin,

In 2010 he starred in Degrassi: The Next Generation as Eli Goldsworthy. In the following year, he appeared in the family comedy Beethoven's Christmas Adventures alongside Kim Rhodes.

His credits in big screen include Cracked, The Divide, Turbo Kid, County Crush and many more. As of 2017, he did two movies which include Sadie's Last Days on Earth and Wellington. He also won the Jury Prize under the category for Best Actor Turbo Kid in the Victoria TX Indie Film Fest.

Muno Chambers is still at the initial phase of career and has a long to go. Along with name and fame, he is also earning a considerable amount of money, however, his exact net worth and salary are not revealed yet.  As per estimation made by various online sources, his net worth can be believed to be over $1 million.

In the year 2004,  the actor was a cast in the movie Godsend which was a massive hit at the box office grossing over $30 million worldwide against its producing cost of $25 million. But the movie received generally negative reviews from critics. In the movie, he shared the screen alongside Rebecca Romijn, Cameron Bright, Robert De Niro, and Christopher Britton.

The Degrassi actor, Munro Chambers has been in several relationships prior. Back in 2008, he dated Canadain actress Vanessa Morgan. The couple dated for only a few months before parting ways.  Even before that, there were rumors of Chambers being in a relationship with Fashion designer and singer Alicia Josipovic.

And after Morgan, Chambers started an affair with actress Melinda Shankar which also did not last long as the duo broke up after six months. As of 2018, there is no news of him having a girlfriend, and is possibly single.

Here is an interview with Munro Chambers.