Motionless and White's Rhythm Guitarist Ricky Olsen's Dating Life! Who is his Girlfriend? Details About his Affairs! 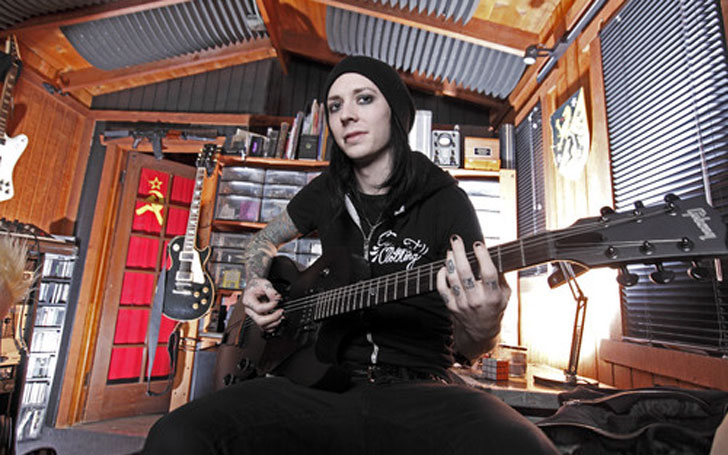 Amercian metalcore band Motionless in White is getting increasingly popular. The band rose to a new standard with the release of their fourth album, Graveyard Shift on May 5, 2017. The group adopted the name, Motionless in White from the Eighteen Visions' song "Motionless and White."

Along with the popularity of the band, rhythm guitarist of the band, Ricky Olson has achieved millions of curious fans. They want to know who Ricky Olson is dating, whether or not he has a   girlfriend and if yes, who is this girlfriend. We have all the answers here!

Who is Ricky Olson Dating Currently?

Twenty-nine years old musician, Ricky Olson, is currently in a relationship with his girlfriend Jaime Levitski. Olson and Jaime Levitski have been together for over two years. Olson is totally in love with his girl and doesn't hesitate to express his love on his social media.

He took to Instagram earlier this year to wish Jaime a happy birthday with a sweet/scary photo that had a caption that read:

"Happy Birthday to my other half, my one and only. Thank you for being the sweetest thing in the world, and always encouraging me to be the weirdo that I am. I'm sorry I can't be there for this special day, but my heart is with you in spirit. I love you more than I will ever be able to write @jaimelevit See ya soon, turd!"

Ricky Olson is quite a loving boyfriend. On his another Instagram post on 24 April 2017, Olson shared a picture of his lovely girlfriend saying he missed her!

"Well, it's that time again. Saying goodbye never gets any easier. Thank you for always being the most incredible person to me and making me feel so completely whole. I love you and miss you already"

Awww! That's so beautiful, sweet and sad at the same time.

Jaime Levitski, however, has maintained her social media account private. But Olson's social media is a definite proof of their strong bond.

Ricky Olson Loves His Dog More Than You Can Imagine!

Olson has a pet dog, and he is extremely close with his dog which we can see in his several Instagram posts. Ricky was as he admitted himself, not a dog person at all!  But his ''little turd'' changed him forever and he ''wouldn't have it any other way.''

Olson  Instagrammed a picture of his dog on 18 July 2017 and wished his pet a happy birthday. He captioned the photo:

Olson is indeed a loving and caring person.