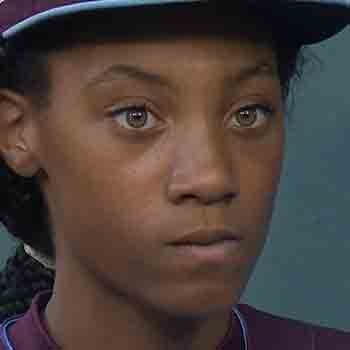 Mone Davis is a female Little League baseball pitcher started playing from her childhood days. One day Steve Bandura found her playing football with her cousins and older brother.  He was very impressed with her playing styles such as perfect spirals, effortless and running and tacking styles. Then he approached her and asked her to join his center for basketball practice. As expected she turned out to be very decent and well-talented player. Now Davis has become one of the best Basketball player and only girl on his team. She also plays excellent baseball and soccer.

Mone Davis was born on June 24, 2001. She is from Philadelphia, Pennsylvania. Daughter of Lamar Davis and Lakeisha Mclean, she started living with her mother since the age of six after the divorce of her parents. She

Her mother is very proud of her daughter. At first, she didn’t have any idea about her daughter’s talent. She was surprised to know that her daughter was so athletic, She gave this statement in an interview for The Philadelphia Tribune.

She is happy that Bandura and other sponsors have helped Davis in many ways. They helped her to transfer to Springside School to further studies. Although she plays excellent sports including baseball, soccer etc. , she considers basketball as her primary sport.

She is well known for her record on August 20, 2014, of ESPN where she was rated 3.4 which is an all-time high score for Little League on ESPN. Her achievement has brought her quick fame and big stars such as Mike Trout, Marcus Stroman, Kevin Durant gave her congratulatory messages through Twitter.

Similarly, she got several requests for interviews which includes a request from famous television host Jimmy Fallon. Celebrities like Ellen DeGeneres, Billie Jean King, and Michelle Obama are some of the celebrities who praised her a lot. She has expressed her happiness saying that she never thought she would be someone else's’ role model. She said that she dreamt about being a role model in her childhood but being a role model of sports was different and cool.

Apart from this, she is also the first Little League baseball player to appear on the front cover of top US sports magazine. She appeared on the front page of Sports Illustrated on August 25 in 2014. Similarly, she has also appeared in the front page of another magazine called Philadelphia Inquirer for five straight days which is a big achievement. Her autographed items are put into auctions on eBay and most of the people earn lots of money.

Similarly, other unauthorized works have been happening around like selling fake jerseys on her name. She has been one of the role models for lots of women and girls all over the world. She has inspired girls to play baseball. She believes that her performance can reduce gender biases to some extent. Lots of articles have also been written regarding this issue concerning the role of women in the sports field.