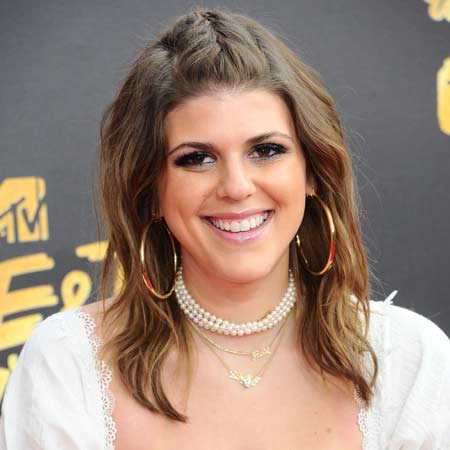 American actress, Molly Tarlov is an undeniable talent in Hollywood. She is best known for her role as Sadie Saxton on MTV's TV series Awkward. Her character is fearless and is one of the most popular girls in school who struggled with weight and her insecurities. Her other work such as Simply Irresistible,  G.B.F., Huge, and Gravity is thoroughly popular as well. She married her longtime drummer, boyfriend, Alexander Noyes.

Born on September 12, 1992, Molly Tarlov is the youngest daughter of film producer and winemaker Mark Tarlov and Judy Roberts. She was raised along with her elder sister, Jessica Tarlov who is a political consultant. Her maternal grandparents were Jewish immigrants.

With a keen interest in acting from her early days, Tarlov appeared in the musical Bye Bye Birdie at the Little Red School House. She attended the arts camp, Interlochen Center for the Arts to enhance her acting skills. Then she joined the NYU summer program in Paris. She graduated from Bennington College with a B.A. in Theatre Arts.

Molly Tarlov debuted in acting appearing in her father's directorial movie,  Simply Irresistible in 1999.  In 2009, she made her TV debut on Nickelodeon teen sitcom, iCarly. The following year, she appeared in the  ABC Family series, Huge as Caitlin.

Tarlov got her major breakthrough in 2011 appearing in the MTV original series, Awkward. She portrayed the role of  Sadie Saxton in the series who is known as one of the popular girls in the school and dislikes the main character, Jenna. She has complex struggles with her weight and insecurities.

Tarlov was associated with the series until its final season. In 2012, she recorded a video clip, It Gets Better Project. In 2014, she starred in the movie,  G.B.F.  The following year, she featured in Eden xo's music video for the single The Weekend.

In 2014, Tarlov starred in the movie G.B.F., a teen comedy written by George Northy and directed by Darren Stein (Jawbreaker).

In May 2015, Tarlov, along with her co-stars from Awkward and other MTV shows did a stylized promo for the Scream where they were all shown bloodied and killed. Tarlov was skewered by a fire poker against a wall behind Katie Stevens from Faking It.

In July 2015, Tarlov co-starred in Eden xo's music video for the single "The Weekend." The video also featured Bonnie McKee and Ricky Dillon.

Molly Tarlov's Net Worth And Salary

Molly Tarlov's net worth is expected to be around thousands of dollars. She earned a good sum of fortune from her acting career. She is active in the film industry since 2009 and appeared in several films and TV series.

She was part of the MTV series, Awkward from 2011-16 and at that time she earned nearly $75k-90k per episode. Besides this, she also earned a handsome sum from brand endorsement and TV commercials.

She has worked in the movies and TV shows including Awkward, Huge, Gravity, iCarly, Haunting on Fraternity Row, Everlasting, Era Apocrypha, G.B.F., and Simply Irresistible.

Molly Tarlov married her longtime boyfriend, Alexander Noyes. He is a drummer and was in the bands Honor Society and Jonas Brothers. The duo exchanged vows at a lavish pink-themed ceremony in Palm Springs on March 4, 2017. The duo dated for a long time which she didn't reveal until she was engaged to Alexander in June 2015.

Once in an interview, Tarlov talking about her husband, she said,

"When I looked at him it was just like my teammate was once again standing there waiting for me at the end of the road."

In 2014, Tarlov lost her aunt, Jill Tarlov who died after being struck by a cyclist in New York. Her aunt's death devasted her family.

She stands at a height of 5 feet 5 inches. She is active on Instagram and Twitter with over thousands of followers. She has a dog named Fran.