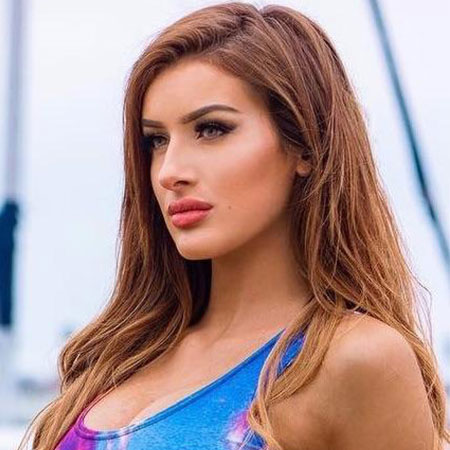 Molly Eskam is an American model and a YouTuber who has about 512k subscribers on her channel. She is also famous on Instagram where she has over 1 million followers. As a model, she has worked in many runway events including the Courtney Allegra Runway Show. She is in a relationship with a famous YouTuber and gamer Brian Awadis who goes by Faze Rug on social media.

Molly Eskam was born on September 29, 1998, in Scottsbluff, Nebraska, the USA under the zodiac sign of Libra. People who are born under this zodiac sign are peaceful, fair and they hate being alone. Eskam holds an American Nationality and belongs to the White American ethnicity.

Her father's name is Kent Eskam and mother's name is Laurie Eskam. She is not the only child born to her parents, she has two elder brothers Chance Eskam and Chace Eskam. She grew up in Scottsbluff, where she completed her schooling and high school education.

Molly Eskam started her career as YouTuber starting a YouTube channel titled MOLLY ESKAM on May 12, 2010. The first video she uploaded was titled Q & A Plastic Surgery; in this video, she talked about her experience with plastic surgery and answered some questions related to it.

She uploaded another video titled VLOG- Yelling at Strangers and How Models Stay Fit. As of January 2019, she has about 512k subscribers on her channel and a total of 28,909,942 views. On January 16, 2017, she uploaded her first ever video with her gamer boyfriend Brain Awadis. The video was titled F**k, Marry, Kill with Faze Rug. The video went viral in a short interval of time.

Another video, Gold Digger Prank was posted on November 30, 2017, and it gained a huge 1.1 million views.

Besides, she is an Instagram model where she shares her modeling photos wearing swimwear and lingerie. As a model, she has made several appearances at different events including Courtney Allegra Runway Show.

Molly Eskam's Net Worth And Salary

She has even collaborated with the YouTube superstar RiceGum which helped her increase her fortune. Apart from this, she also earns a good amount of money from Instagram where she has about 1.2 million followers as of 2019.

Eskam doesn't reveal about her properties, however, she keeps on sharing her photos with her luxury car, Mercedes Benz E 450 time and again. As of present the car she owns costs around which worth about $75,375.

Molly Eskam is a beautiful Model and YouTuber. She is dating a YouTuber named Brain Awadis who runs his YouTube channel under the name of FaZe Rug. They first meet each other in mid-2015.

They often post their love life on their social media posts. They even uploaded a video on 30 June 2017, where they shared their first kiss. Looking at their love life, we can say that they are very close and deeply in love with each other.

Meanwhile, her boyfriend Brain even posted a video on 31 December 2017 revealing they were still unclear about their relationship status. But Eskam didn't talk about this video, so we a s sume that the celebrity couple is having a strong relationship together.

Who Is Molly Eskam's Boyfriend?

Brain Awadis is a famous YouTuber and gamer who has about 11 million subscribers on his YouTube channel. He was born on November 29, 1996, in San Diego California. He is the son of Iraq immigrants. He is not only child on his family, but he also has a brother named Brandon Awadis.

His Net Worth is about $2 million which he made it from vlogging and selling his own merchandise online.

In the video shown below, Molly Eskam pranks her boyfriend Brain Awadis by asking him for $20k.

You May Also Like: Patty Mayo, Colleen Ballinger, Tana Mongeau, and Ryan Higa