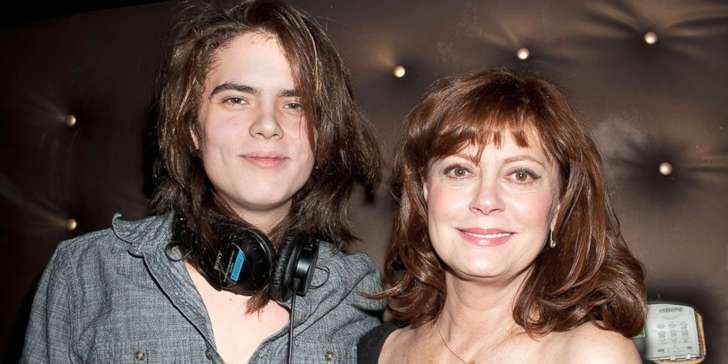 23 years old actor/musician Miles Robinns the son of Susan Sarandon, started his career as the musician and has also done some movies. there is no specific bio given his height, weight and relationship on the outside sources but he is an open minded person and believes in thinking out of the box and his family themselves are proud of him. he seems to be wise at this small age.

miles who is a lead singer and bassists of new york city rock band "the tangents" - apparently wears dresses and Susan herself gushed about it.

during an interview earlier this year, she said about miles: " my son miles is a musician and a DJ. and sometimes when his band performs they all wear dresses and he has long hair."

Miles is the youngest of Susan’s three children. His older half sister is 30-year-old actress Eva Amurri and he has one older brother, 26-year-old freelance filmmaker jack henry.

His Oscar-winner mother was married for 12-years to Chris Sarandon – hence her last name, that she kept as her stage name. Susan was in a number of relationships most notably the one with Italian filmmaker,Franco Amurri, with whom she gave birth to her first child, Eva Amurri. And with actor Tim Robbins, the father of jack and Miles.

Susan Sarandon has long been a supporter of the LGBTQ community. The 68-year-old actress and activist were more than willing to share that her own 23-year-old son Miles doesn't adhere to gender stereotypes either. Susan readily admitted that her youngest - with former longtime partner Tim Robbins - often wears frocks when he plays with his band, as she told people at the Trevor LIVE event on Monday.