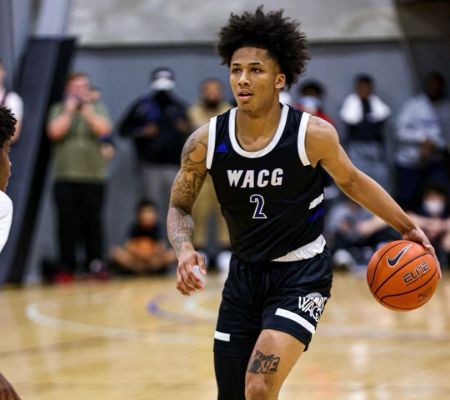 Michael "Mikey" Anthony Williams is an American basketball player. He played at San Ysidro High School and is placed in the top 5 class of 2023 ESPN recruit and a consensus five-star recruit. Williams is also one of the top players in the 2023 class.

Williams' net worth is yet under review, though some online sites mention it to be around $100,000. He held a basketball for the first time when he was just 11 months old and eventually started playing under the tutelage of his parents.

The Naismith National Youth All-American Report ranked him the number one player in the 2023 class during his seventh and eighth grades. Mikey joined the North Coast Blue Chips Amateur Athletic Union (AAU) team in eighth grade.

The 16-year-old became famous around this time when he played alongside Bronny James, who is the son of basketball player LeBron James. Williams played for the Compton Magic on the AAU circuit in 2019.

As a freshman, he played for San Ysidro High School in San Diego and made his high school debut, recording 41 points, five rebounds, four assists, and four steals in a 98–46 win over El Cajon Valley High School. Williams scored 50 points with an 85–77 victory over Mission Bay High School in his next game.

The 16-year-old broke the CIF San Diego Section single-game scoring record of 76 sets which was held by Tyrone Shelley since 2005 and set the state freshman record for single-game scoring in 2019. He scored a career-high 77 points, making nine three-pointers, in a 116–52 win over Kearny of San Diego.

Playing for an HBCU

ESPN, Rivals, and 247Sports consider Mikey a five-star recruit and a top-five player in the 2023 class. He has received offers from many NCAA Division I programs, including Arizona and Arizona State.

The 16-year-old was offered by a number of historically black college and universities (HBCU) basketball programs in June 2020 after he showed interest in playing for an HBCU on Twitter and Instagram.

Who is Mikey Williams' girlfriend?

Williams appears to be single as of now. As per Famous Birthdays, he dated fellow basketball player and Instagram star Serenity Johnson. However, it is not known if Miley and his girlfriend, Serenity, 15, are still together.

The 16-year-old is active on social media channels and has been able to accumulate a large social media following, with 3M followers at the time of the writing. Among his Instagram followers are musician Drake and basketball players LeBron James and Kevin Durant.