Mike Vogel is an American actor and model who rose to fame after his appearance in the 2008 sci-fi thriller film, Cloverfield.

He has been married to model Courtney Vogel since 2003. The couple shares three children; Gabriel James Vogel, Ca s sy Renee Vogel and Charlee B. Vogel.

Mike Vogel was born as Michael James Vogel on July 17, 1979, in Abington Township, Pennsylvania, the United States of America, to parents Jim Vogel and Kathy Vogel.

He was raised along with two siblings; brother Daniel Aaron Vogel and Kristin Vogel in Warminster Township, Pennsylvania. He is of American nationality and belongs to white ethnicity.

Both of his paternal and maternal grandfathers fought in World War II; one who was a tank commander fought in the Battle of the Bulge while the other was a Seabee in the Navy.

Vogel studied at William Tennent High School. He was on the freshman wrestling team while in high school.

Later in 1998, he joined Cairn University in Langhorne, Pennsylvania from where he completed his graduation.

During the early 2000s, Mike Vogel moved to New York City and auditioned for modeling slots and acting roles. He started his modeling career with the iconic jeans company, Levi Strauss & Company.

He subsequently got a role in the Fox television comedy series, Grounded for Life'. He appeared on the show from 2001 to 2004.

Vogel made his film debut with the role of Eric Rivers in the 2003 teen sports film, Grind, starring Adam Brody and Jennifer Morrison.

From 2017 to 2018, he played the recurring role of Capt. Adam Dalton in the NBC drama series,The Brave.

He has since appeared in dozens of films and series such as The Texas Chainsaw Ma s sacre, Poseidon, Blue Valentine, The Sisterhood of the Traveling Pants, The Help, Bates Motel, Under the Dome, Cloverfield and The Case for Christ.

Mike Vogel is one of the successful American actors and he has appeared in dozens of films and television series.

He has earned a huge amount of money throughout his career. According to the Celebrity Net Worth website, Vogel has an estimated net worth of $1 million.

His 2008 film, Cloverfield, which was made under the budget of $25 million, had a whopping box office collection of $170.8 million.

As we mentioned earlier, Mike Vogel is a married man; he has been married to the American model and actor Courtney Vogel. 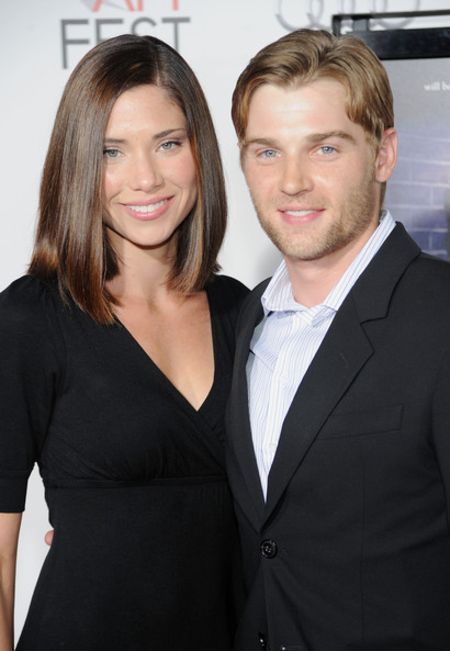 The couple tied the knot on January 4, 2003, and ever since they are living a happy married life. The husband-wife duo is parents of three children; two daughters, Ca s sy Renee Vogel, 12, and Charlee B. Vogel, 10, and a son, Gabriel James Vogel, 6.