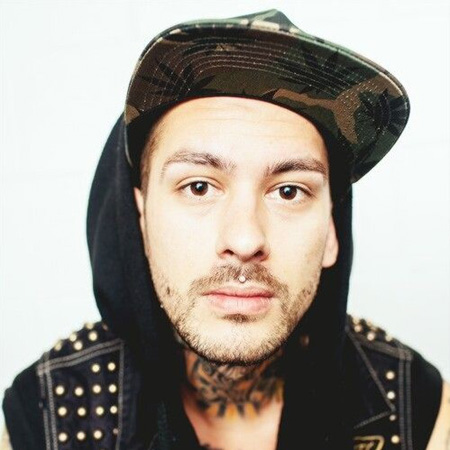 Mexican-American musician, Mike Fuentes is popularly known by his stage name, MikeyWhiskeyHands. He is the founder and drummer of the post-hardcore band, Pierce the Veil along with his brother, Vic Fuentes.

Mike Fuentes was born as Michael Christopher Fuentes on December 14, 1984, in California, U.S. He belongs to the White American ethnicity and holds an American nationality.

His father, Vivian Fuentes was a former Jazz musician who later worked as a painter whereas his mother Victor Gamboa is a housewife. His parents were middle-class American-Mexicans.

Fuentes was raised along with his brother, Vic Fuentes in San Diego. He also has two half-brothers and a half-sister. He attended the Misson Bay High School and completed his graduation in 2003.

Mike and his brother were inspired by their father to pursue their career in music fraternity. Later, his brother learned guitar and singing while Mike took up the drums.

After a short time, they formed their own band, Early Times and used to perform in their local areas. They released the three EPs which was later renamed 'Before Today' due to the copyright issues.

In 2004, Mike released his first independent album with the band, Before Today.

Nonetheless, in 2006, He along with his brother founded their own American hardcore rock band called ‘Pierce the Veil.' Even, he was the percussionist for the supergroup, Isles & Glaciers.

The band's first album, Flair for the Dramatic was launched under the label of ‘Equal Vision Records’ in June 2007. After a year, they released the EP titled ‘The Hearts of Lonely People’ with the band, ‘Supergroup Isles & Glaciers’.

In 2010, they released their second album, Selfish Machines. The album was a huge hit and reached the number one position on the Billboard Heatseekers Chart.

Despite that, Fuentes began his solo hip-hop career too. In 2012, he signed the contract with Velocity Records and launched his singles which featured his rapping on the music of Pierce and Jaime.

He collaborated with many bands such as;  ‘Sleeping With Sirens,' ‘The Devil Wears,' ‘Mayday Parade’ and ‘Chiodos.' Mike has also appeared on the documentary video which covers the world tour of his band.

Mike is in a romantic relationship with his model girlfriend, Alysha Nett. The duo started dating since 2013, and still, they are together. The pair first interacted through the help of their mutual friend.

Prior being in relation with Nett, Fuentes was linked up with several girls who were related to modeling sector such as; Amor Hilton, Danky French, and Melissa Marr.

Fuentes was a huge fan of Harry Potter. Even he tattooed the name on his arms. He is a fitness freak too and always does 45 to 60 minutes exercise before a show.

Pierce the Veil fame artist, Mike has earned an impressive amount of net worth from his musical career, but due to his secretive nature, the exact figure hasn't revealed yet. However, it is assumed to be in millions of dollars.