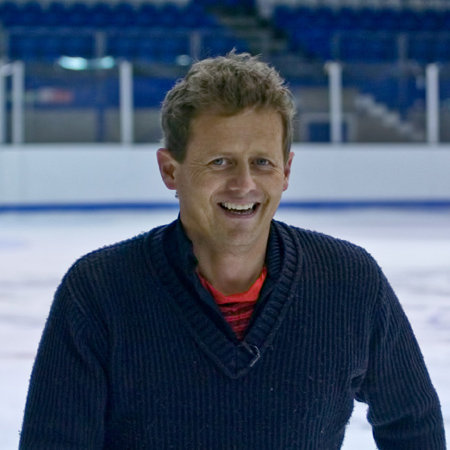 Sports presenter, Mike Bushell is a media personality. He has served as a sport-presenter on BBC's show called Breakfast and covered a wide range of different pursuits for the show. He holds the title for crossing one mile of water in a large inflatable ball called Zorb.

He holds the world record for trying different sports. His features often include top tips from the stars including Serena Wiliams, Ben Ainslie, and Colin Montgomerie. He became a global internet sensation in April 2018 while covering the commonwealth games on the Gold Coast Australia. He fell into a swimming pool by interviewing swimmers. That news is shared 11.5 million times a day.

He received 2:1 in a drama and television degree at King Alfred’s in Winchester (University Winchester). He began his broadcasting career with the BBC radio in 1990. Later, he became the entertainment reporter-presenter for BBC South Today before joining BBC News Channel.

Mike Bushell was born on December 11, 1965, in the United Kingdom, under the birth sign Sagittarius. He is British by nationality and belongs to the Caucasian ethnicity.

His career has been a wonderful one, which is all his dedication and passion towards work. He grew up in Hertfordshire and spent his teenage days in Yorkshire. He attended Ashwell School. His father, John Bushell was the headmaster of that school.

He attended Ashwell School where his father was headmaster. He started his own newspaper named Daily Owl and sold it to friends in the village for 1p.

He played chess for Hertfordshire and ran in the county cross country team. During that time, he wished to pursue his career in a biology or animal caretaker, but after a jape with weasel went disastrously wrong he had to change track.

When he was 11, he wrote an opera and was later released it in two bands. In 1997, his family moved to Harrogate and went to secondary school at Granby High School.

It was here during the production of Hobson’s Choice that he first got the drama bug and played the part of Willie Mossop. He then joined the National Youth Theatre.

He then attended King Alfred's College (now the University of Winchester), where he earned a 2:1 degree in drama and television.

Bushell has been simply outstanding with his work and won millions of hearts worldwide. His presentation skills are just wonderful, to say the least. Currently, he is working as a presenter for the BBC.

Bushell is one of the most popular sports presenters in the world. His presentation skills have got him a huge fan base.r

Bushell joined the National Youth Theater to continue his career. He formed a band with other journalists while training on the reporter's job. He sang in many gigs in the East End of London during that time.

Currently, Bushell is working for the BBC and hosts a show called BBC Breakfast. His show is loved by audiences all over the world and this show of his has taken his fame to the highest level.

Bushell also worked for another branch of BBC which was called the BBC South Today and later on he received his show the BBC Breakfast. In January 2018, he participated in And They’re off in aid of Sports Relief.

During the 2018 Commonwealth Games, Gold Coast, Australia, he fell into a swimming pool after misspacing a step whilst interviewing some of the English swimming team on 11 April 2018.

Bushell stands a height of 1.6 meters i.e 5 feet 5 inches. He has earned popularity working at BBC. As the journalists at BBC are paid $31k - $33k yearly, we can say that he has earned a huge amount of salary in his career.

Looking at his popularity, earnings, and lifestyle, he might have maintained an impressive net worth in his life.

Bushell, 52 was married and welcomed three children. He is single and is not seen involved in any relationship as of June 2018.

His personal life has had its ups and downs and highs and lows. He married his childhood sweetheart, Kim. Sadly their relationship was not meant forever and the couple had to separate.

After a very long relationship, the couple went through the process of divorce and ended their relationship. He has three children named Lucy, Isabel, and Sophie with her. He took great care of his wife when his first daughter was born and he did the same for the next two also.

He was very committed to his family but sadly could not save his marriage with Kim and this was a really hard time for him. He is a superstar now and has great earnings which means he can marry another woman but till now he might not have found the perfect person to make him feel perfect again.