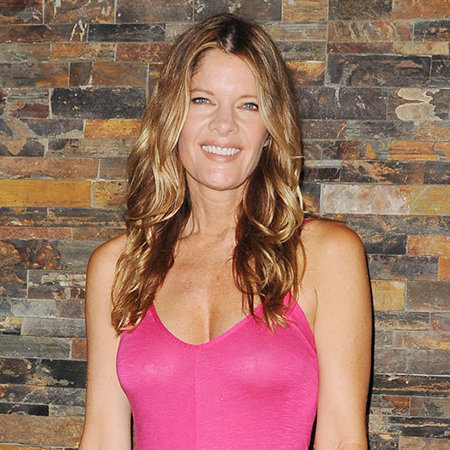 An American actress, screenwriter, and producer Michelle Stafford is known best for her performance in the role of Phyllis Summers on the CBS daytime soap opera The Young and the Restless. She is the winner of the Daytime Emmy Awards twice, which proves her talent and strong presence on the Hollywood television screen. She can be seen currently in an ABC daytime soap opera titled General Hospital as Nina Clay.

Michelle Stafford was born in 1965 in Chicago, Illinois to a lawyer father. Her mother is an executive of Universal Studios. She has an older sister named Janine Stafford. The family moved to Montrose from California when she was little. Michelle grew up in California and attended her school in California. Since a young kid, Michelle loved to dress and pose.

Michelle Stafford wanted to become a model when she grew up and hence following her dream, Michelle started modeling just after graduating from high school. When Michelle was 18, she was diagnosed with a brain tumor but it was not malignant.

Stafford holds American nationality and her ethnicity is White.

Michelle Stafford’s career started as a model that took her to walk on the runway of far-away destinations like France, Italy, and Japan. Michelle lived in Italy for a year which made her more open to the world. After a year in Italy, Michelle moved back to the U.S and started to audition for acting.

Michelle started her career in acting in 1990 from Fox’s soap opera called Tribes. Her career was boosted after appearing in CBS Daytime Soap opera called The Young and The Restless as Phyllis Summers which eventually impressed the producers and got the contract for other roles. She has been active in acting ever since. She can be seen on ABC daytime soap opera called General Hospital as Nina Clay at present.

Michelle Stafford has her own skincare line called Skin Nation that she launched in 2016. The skincare products are said to be natural, organic, gluten-free, vegan, and cruelty-free.

Michelle Stafford is a talented and hardworking actress. She has won several awards including the two Daytime Emmy Awards in 1997 and 2004 and Soap Opera Digest Award in 1996, 1997, and 2003 for her performance in The Young and the Restless. Besides, she has been nominated for Emmy Awards and Soap Opera Digest Awards several times in different years.

Michelle Stafford's Net Worth, Salary, And Major Source Of Income

Michelle is currently one of the leading figures in the world of acting. She is involved in several of the projects and is paid a very good salary for her works. Her exact salary is not mentioned anywhere but is supposed to be with five zero figures increasing her net worth every year. Michelle Stafford is estimated to have $15 million of net worth at present.

In the year 1999, the actress was cast in the movie Double Jeopardy along with Tommy Lee Jones, Ashley Judd, and Bruce Greenwood. The movie grossed over $177 million against its budget of $40 million.

Reportedly she also planning to the busy house in Glendale California where the average price of the house is $440,000.

Michelle Stafford is single as it is what she wrote in her blog titled ‘How I became a mom’. It is not known if she was previously been married and has been divorced from her husband so as to refer to her as single or she has never been married.

She is extremely joyful and overwhelmed to be a mother and has stated that she is enjoying being a single parent.

While Michelle was busy in her modeling career, she started experiencing swelling on her left eyelid and while she went to a medical check-up, the doctor said that she was diagnosed with a brain tumor. Fowwlig this he went to brian surgery. During her recovery period, she lost weight.