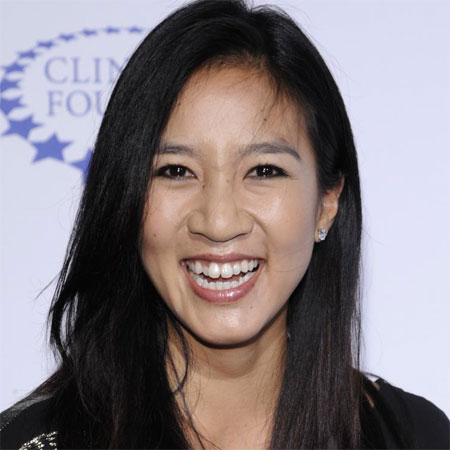 American athlete, Michelle Kwan is widely considered one of the greatest skaters of all time. She is a retired figure skater and five-time world champion figure skater, two-time Olympic medalist, and nine-time U.S champion.

Michelle Kwan was born as Michelle Wingshan Kwan on 7th July 1980 in Torrance, California, United States. Regarding her ethnicity, she is of Asian ethnicity and belongs to American nationality. She is the third child born to Danny Kwan and Estella Kwan. Her parents were immigrants from Hong Kong.

Kwan has two siblings, Ron Kwan, an ice hockey player, and Karen Kwan, a figure skater. She began skating at the age of five; Her interest towards figure skating started to grow when she started to follow her siblings.

Kwan finished eighth in the 1994 World Championships at the age of thirteen, earning a spot as an alternate for the 1994 Olympic Games.

Kwan attended Soleado Elementary School and left in 1994 to be homeschooled when she was in 8th grade. She completed her graduation in 1998 from Rim of the World High School and later joined UCLA for one year.

Kwan awarded an honorary Doctor of Humane Letters from Southern Vermont College in May 2010.

Michelle Kwan received one-year training from the Coach Frank Carroll. She participated and at the junior level at the United States Figure Skating Championship. She was placed ninth in the competition.

Kwan excelled in the 1997-1998 Olympic season. She defeated Tara Lipinski to win the “Skate America” and also defeated Skate Canada.

Kwan withdrew from the Champions Series Final due to a stress fracture in her foot. However, she won the 1998 U.S championship despite her ailing foot.

Kwan’s performance at the championships praised as one of the best; one judge cried after watching her perform. Her achievements for the year crowned her win as 1998 World Champion.

Before the 2002 competitive season, Kwan parted ways with her longtime coach, coach Carrol. In the 2002 Olympics, she won the bronze medal and the silver medal in the 2002 Worlds.

Kwan hired a new coach, Rafael Arutyunyan in 2003. She placed fourth at the 2004 World Championships. Michelle Kwan made an appearance in 2009 after several years of not competing. Kwan performed at a show headlined by Kim Yuna; South Korean World Champion dubbed “Ice All Stars.”

Besides her career as a figure skater, Kwan has made a featured in the movies as well such as Mulan II, Ice Castles, and Reflections on Ice: Michelle Kwan Skates to the Music of Disney’s “Mulan.”

On 9th November 2006, Secretary of State Condoleezza Rice named Michelle Kwan as a public diplomacy ambassador. She also serves as an adviser to the U.S.-China Women's Leadership Exchange and Dialogue (Women-LEAD) on April 15, 2011.

Kwan has also served as a television correspondent for the 2010 Winter Olympics at ABC TV show. Currently, she serves in the U.S State Bureau of Educational and Cultural Affairs. Kwan worked as an outreach coordinator in Hilary Clinton's 2016 Presidential campaign.

Michelle Kwan married Clay Pell, a lawyer, military officer as well as the director of strategic planning on the National Security staff at the White House. They first met in April of 2011 and began dating.

Years later, they announced their engagement and were married on 19th January 2013 in Providence, Rhode Island. The ceremony was attended by fellow Olympians Dick Button, Brian Boitano, and Dorothy Hamill.

During the time of their marriage, Pell was a White House National Security staffer under an American President, Barack Obama. He also ran unsuccessfully for the Rhode Island governor in 2014.

Even, they both were active supporters of Democrat Hillary Clinton’s presidential campaign last year, and Pell was a member of the Electoral College.

However, after four years of their marriage, Pell filed for divorce from Kwan in March 2017. He issued a statement regarding the divorce;

It is with deep regret that I share that Michelle and my marriage is coming to an end. This is a sad and difficult turn of events for our family. I love Michelle, and wish her the very best as her life takes her in a new direction.”

“I want to thank friends and family who have given wisdom and support, and I ask for privacy during this challenging time.”

But, Kwan hasn’t opened up about the split yet. She has not made any comment regarding the divorce.

Michelle Kwan is known for her consistency in delivering great performances throughout her skating career. Her net worth is an estimated $17 million.

Kwan has had many endorsement contracts throughout her career, including Caress soap (Unilever), Aim Funds, Coca-Cola, East West Bank, Maxxis, from where she collected some money.