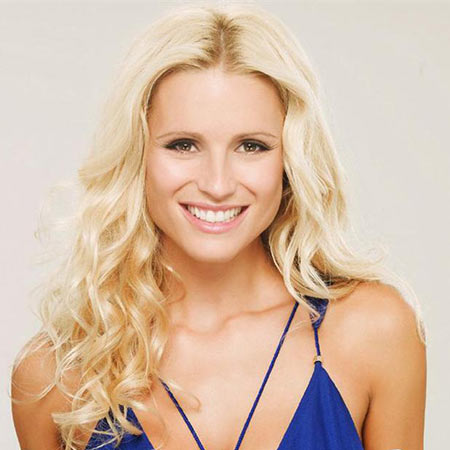 Michelle Yvonne Hunziker is a famous Swiss-Italian actress, TV hostess, singer, and model. She is one of the most popular celebrities from Italy. She is widely appreciated for her contribution towards the fashion and the modeling world.

Michelle Yvonne Hunziker was born to Dutch mother Ineke and German speaking Swiss father Rudolf (died-2001) on 24 January 1977 in Sorenga, Lugano, Switzerland. Her family moved to a suburb of Bern at Ostermundigen in 1983.

There, she attended the elementary school and later Hunziker and her mother moved to Milan. At Milan, she developed a keen interest in modeling and was hired by a famous modeling agent, Riccardo Gay at the age of 17.

Since then she appeared in well-known magazines such as Rocco Barocco, La Perla, Lovable, Swish, Colmer, Fuerte Ventura, and Armani.

Michelle Hunziker made her first appearance in the film after she was offered to play a role in TV series La Forza dell'Amore by director Vincenzo Verdecchi in 1998. Later, she took the female lead role in Fammi stare sotto al letto.

Hunziker also appeared in the documentary film The Protagonist. Subsequently, she appeared with Alero Tomba in Alex l'Ariete. She also co-hosted the Canale 5's La festa del Disco with Pippo Baude. In 1999, she presented fashion and lifestyles late night TV show Nonsolomoda on Canale 5 until 2001.

In 2003, Michelle Hunziker made her appearance in the English movie named Ancient Warriors. In 2006, she landed her steps into the world of singing and released an album named ‘Lole’.

In 2007, Michelle Hunziker was the co-host of worldwide popular Italian singing contest, the ‘Festival di Sanremo’ on Rai Uno.

Upon becoming a popular model, Michelle Hunziker met Italian singer Eros Ramazzotti and fell in love with him. She married her boyfriend Ramazzotti in 1998.

However, their married life did not sustain long. They divorced after four years of their relationship. She has a child as a daughter named Aurora Sophie from her ex-husband. Her daughter was born before their marriage in 1996.

After being separated with Eros Ramazzotti, she announced her engagement with Trussardi-heir Tomaso Trussardi in 2013. Together, they have two daughters named, Sole (born 9 Oct 2013) and Celeste (born 8 March 2015).

Currently, she lives a luxurious life with her husband and children.

Michelle Hunziker has a huge number of admirers on social networking sites. One can see her posts and photos on her Instagram account. She is also available on Facebook and Twitter for her fans.

Michelle Hunziker salary is extraordinary. Her career earnings boosted her total net worth. She has a whopping net worth of $10 million. She owns a BMW I3 car worth $90 thousand. Her earning from the endorsing company like Emmentarel has boosted her net worth so well.

Michelle Hunziker has an attractive body figure with a height of 5' 5''. She looks sexy and alluring in swimsuit and bikini.