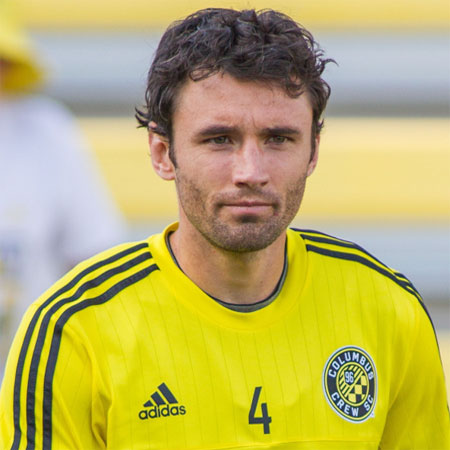 Christian Maggio is a spectacular Italian footballer. He was born in Montecchio Maggiore, Italy on 11 February, 1982. He is currently playing for Serie A club Napoli and Italian national team. He plays actively as a right back/ right midfielder in his team clad in No.11 jersey.

He received most of his training in the Vicenza youth academy where he played for three years with the youth teams. He graduated from Vicenza youth academy in the year 2000. He debuted for Vicenza in Serie A in 2000-2001. He played for Vicenza till three years making 38 appearances and registering a single goal. Florentina noticed his performance and invited him in the club. Since he wanted to play in Italian Serie A, he ecstatically accepted the Florentina offer. He was transferred to ACF Florentina in the year 2003. He played significant matches for ACF Florentina till 2006 appearing in fifty six matches registering two goals. He was then loaned to Sampdoria in 2006-2007 for 150,000 Euros. Maggio played to his full potential and certainly his best displaying splendid performances for U.C. Sampdoria. He had registered nine goals in twenty nine matches. He was transferred to Napoli for eight million Euros.

He exhibited consistent performances for Napoli. In a match against Bologna he scored the last winning goal registering victory. He also helped Napoli win against Florentina at Stadio Artemio Franchi. Maggio plays effectively as a right midfielder and has played as a right back in most of his matches. He is known for his prolific attacking skill. He appeared in thirty three league games for Napoli in 2011-2012 delivering assistance goals. His novice honor came to him in 2011-2012 series rewarding him with the Serie A Team of the season. He has played different international matches as well and has performed inarguably well. He made his international debue with the Italian national team against Greece. He was also part of 2010 World Cup and UEFA Euro 2012.

Maggio was married to his girlfriend Valeria Mettifogo(Spouse) in the year 2010. They have a Children together named Mattia Maggio.Michael Parkhurst is an American soccer player who plays for the USA National Team as well for the Columbus Crew in Major League Soccer. Having won the 2005 MLS Rookie of the Year, 2007 MLS Defender of the Year, being the member of two CONCACAF Gold Cup squads and participating in the 2008 Summer Olympics aren’t his only achievements as he is capable, also of playing both centerback and rightback positions.

Born as Michael Finlay Parkhurst on 24th January 1984 in Providence, Rhode Island, his parents Michael and Marian Parkhurst grew him and his siblings up in Rhode Island. His sister, Molly, was a captain for University of Rhode Island's women's soccer team and provided inspiration for him to follow soccer as well. Michael attended the Bradenton Soccer Academy in Florida and played college soccer at the Wake Forest University for Demon Deacons. Michael’s time in Deacons lasted from 2002-2004 where he started all sixty two games of the team with delivery of one goal and two assists. Named a second team All-American as a sophomore and junior, he graduated with a degree of history from the university. He was signed into MLS in a Generation adidas contract in the 2004 season.

On 1996, Parkhurst was in attendance at the inaugural home game for the New England Revolution as he played for CLCF Soccer and Bayside United. In January 14, 2005 he was selected in the 2005 MLS Super Draft by his hometown revolution in the ninth position. This was the year he was awarded the MLS Rookie of the Year and he appeared always for the Revs in his first season.

Parkhurst signed a contract in December 9, 2008 as a free agent for three years with Danish Superliga side Nordsjćlland. His debut for the team was on March 1, 2009 which was a draw match against Vejile. The 2009-10 season allowed him to showcase his versatility as Michael was inserted into positions like the full back as well as the centre midfielder. His capacity lied however at playing right back. He helped the Wild Tigers win the club’s first cup, the Danish Cup the first trophy in its nation.

Owing to numerous injuries, Parkhurst was set back and his position was lost to Jores Okore, but he returned in time for Nordsjćlland’s Danish Cup final, which led to a win. It was the second consecutive year the club won the trophy. As for the start of the 2011-12 season, speculations arose about him to have no future at the FCN with the contract about to come to an end, and the emergence of partnership of Bjelland and Okore in the central midfield position. He played the right back position and ended the speculation phase by signing a one year extension deal with the club after helping it to start its season as its best one ever. Despite being offered better financial promises from other clubs, Parkhurst chose to remain in Nordsjćlland and helped it to win the Danish Superliga for the first time in the club’s history. This led to securing the club’s position in the 2012-13 season’s Champions League group stage. A total of 106 appearance and three goals ended his career in Nordsjćlland.

After his contract with Nordsjćlland expired, Parkhurst joined the FC Augsburg on 19 December 2012 on a free transfer. It finished 15th in the 2012-13 season and his debut for the team was in Germany on February 10, 2013 which was a draw against 1.FSV Mainz 05. He played for the club until 2014 with two appearances and no goal.

He joined his current team Columbus Crew from the New England Revolution in exchange for the Crew’s first round selection in the 2014 MLS SuperDraft on January 12, 2014. A total of 11 appearances have yielded no goal, and all the matches are starts at centerback for Michael. He was allocated as captain for the Season Opener against DC United on March 8, 2014.

This Irish-American with an Irish passport declared his desire to play in the Irish national team if he wouldn’t be selected in the American team. However, he was called upon for the 2007 and the 2013 Gold Cup by the United States National team. On June 9, 2007, he earned his first cap against Trinidad and Tobago hence cannot be playing for the Republic of Ireland. As for the 2014 FIFA World Cup, he has been included on Jurgen Klinsmann’s 30-man preliminary roster.

Michael Parkhurst has a height of 5 feet 11 inches and a weight of 70 kilograms. He is married to his longtime girlfriend Sam and considers raising two kids a full-time job for him and his spouse. According to the transfermarket his salary for the Columbus Crew is supposed to be 300 thousand dollars. This humanitarian soccer player has established himself well in the football fraternity and a lot is left to be seen from him in the upcoming years.

His height is 1.84m and Weight is 79 kg.His Nation is Italy. His Current Team is S.C.C Napoli as a midfielder. His current Salary is 1.2 million Euros. Christian Maggio has helped in bringing Coppa Italia in 2011-2012 seasons to Napoli. He has appeared in Italian U-18, U-20 and U-21 teams registering four goals in thirty one matches. He has been representing the Italy national team since 2008.