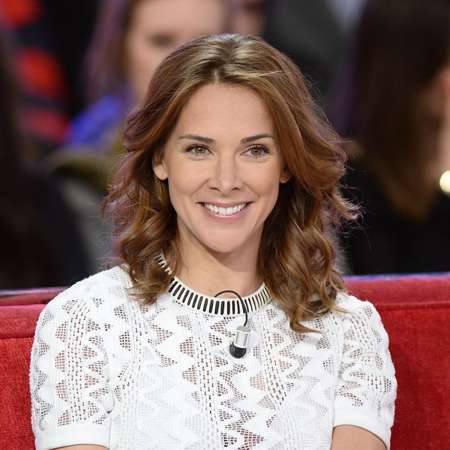 Melissa Theuriau is a news reporter who was voted as one of the most beautiful news readers after video clips of her news reading went viral.

Melissa Theuriau was born in Echirolles in France. She is a half medi and half alpine referring to her parents.

She attended Technical University, Pierre Mended-France, in Grenoble, in News-Communication and got her master degree from the Institute of Communication and Media (ICM) at Echirolles in Audiovisual Journalism.

In 2002, Melissa Theuriau was a reporter at Match TV. Since 2003, she has been an anchor and reporter for La Chaine Info. There she got much attention from people. Melissa rose into the limelight when she worked as a travel show host and a newscaster for TF1 and LCI news channel. Her programs were the 6:40 news on LCI, the voyages travel show on Wednesdays at 13:55 on LCI, LCI Matin (LCI Morning) and TF1 from Monday to Thursday. Melissa refused the offer to become the anchorwoman of the weekend evening news of TF1 as a summer replacement of sitting anchorwoman, Claire Chazal, which shocked the management of TF1.

Metropole6, another French channel, announced Melissa's arrival for September as presenter and editor-in-chief of Zone Interdite (Forbidden Zone), which is a weekly magazine show displaying investigative reporting. This news was announced in June 2006. Melissa became anchor and co-editor in chief of the influential TV magazine, Zone Interdite (Forbidden Zone), on M6.

Melissa Theuriau as well as presents Une Photo and Deux, Un jour and trios jours avec moi, on the French TV Channel Paris Premiere in a corporation with Paris Match. 'Une photo and Un jour' presents the story behind historic and iconic photos. 'Deux, trios jours avec moi' is a travel program in which an invited guest explores more about himself or herself during a trip.

Melissa Theuriau became an internet sensation when a compiled video of her reading news was uploaded. The video received millions of hits from audiences. She said that she was surprised to see the reaction from the audiences and it was not to seek the publicity.

The Daily Express voted Melissa Theuriau as the world's most beautiful news reporter in 2006. In addition to that, she was also voted TV's sexiest news anchor by the reader of Maxim. Similarly, she was voted the most beautiful woman in the world in the French edition of FHM in May 2007. Melissa is also referred to as 'la bombe cathodique' (the Television bombshell) by Paris Match. Voici, a French tabloid, published an image of Melissa being topless at a beach in 2006 for which her lawyers are attempting to clean up the mess from its origins from the internet.

She topped the annual list of highest-paid journalists. This French Journalist and TV host have an estimated net worth of $18 Million, which means she earns a good amount of salary.

Moving on to Melissa Theuriau's personal life, her relationship status is married. She was engaged to French-Moroccan descent actor, Jamel Debbouze, on March 29, 2008. Her husband is an actor, comedian, director, producer, and screenwriter.

They had their first child, a son named Leon, on December 3, 2008. In 2011, their second child, a girl named Lila, was born to them. Melissa is leading happy married with her hsuband and children.

Melissa Theuriau and Jamel Debbouze ranked within the top ten of the most popular couples in France for Gala magazine.

Being a TV personality is not an easy thing and to maintain a fit and healthy body in daily life is also a difficult task. Melissa Theuriau definitely has an elegant body with a height of 5 feet and 6 inches. Her exact weight is not available right now.