Maxwell Jenkins is arguably America's finest actor who shot to fame for his acting credits in Sense8 and Betrayal. In 2016, Jenkins rose to prominence from his appearance as Ryan Jensen in a Family Man.

The 16 years old actor has already established his name in this field, and he has preserved a decent fortune from his acting profession.

Both his parents are co-founders and serve as directors of Midnight Circus in Chicago. The Circus also funds general improvements for the Chicago playgrounds the Circus is hosted in.

Lost in Space actor has a very charming and good personality. He has a very good height too. He stands at the height of 5 ft 11 inches and Weight 73.

He has maintained his body well fitted at an early age as he is in the glamour field. His zodiac Sign is  Taurus.

Started Acting At The Age Of Twelve

Furthermore, the American is not only the child of his parents as he has a sister named Samantha Jenkins. From the early age of five, Jenkins began performing in Circus.

He performed acts like juggling, mandolin, and tightwire. At the age of twelve, Jenkins made his first television appearance as Oliver on ABC's Betrayal. 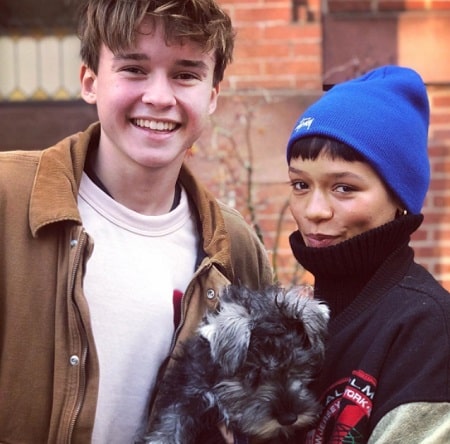 CAPTION: Maxwell Jenkins before the shoot of a movie SOURCE: Instagram @maxwelljenkins

After that, he worked with Lana Wachowski in the series Sense8. In 2016, he made his feature film debut in A Family Man as a young boy fighting leukemia, opposite Anupam Kher, Gerard Butler, and Gretchen Mol.

Currently, he portrays the character Will Robinson in Netflix's series Lost in Space. Recently, he landed the role of Young Reacher in the television series Reacher. Now, Jenkins is working on his new project, Dear Edward, which will be released soon.

The prominent actor Jenkins earns a decent amount of money from his career as an actor, and as per the estimation of some online sources, his net worth is around the six-digit mark. To date, he has made his appearance in various television series.

Jenkins is very young for his age to get involved in love affairs. He is busy building his career and studying.

Meanwhile, he is very fond of music, as he sings and plays mandolin for the band Cowboy Jesus and the Sugar Bums.

Jenkins is also very fond of pets and owns a pit bull. Moreover, we can find more details on his current lifestyle by following him on Instagram, where he is verified as @maxwelljenkins gaining over 196k followers.

He posts his videos of traveling, having fun and enjoying different food dishes on his official social media account.

Check Jenkins' interview about his new work in The Lost Space,