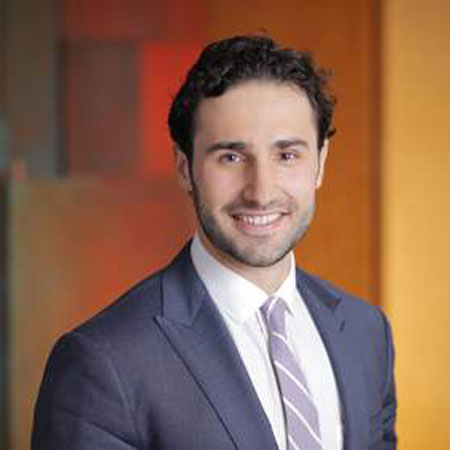 Max Shifrin is an American lawyer. He is the lesser known husband of the former Today Show and Good Morning anchor, Sara Haines. Max Shifrin and Sara Haines married on 22nd November 2014. Currently, Shifrin served the New York firm, Baker Hostetler since 2014. Prior he served to Storch Amini & Munves, PC, and Fried Frank. His spouse Sara is an American television host and journalist widely known for her work on various well-known TV shows Today, ABC News, and Good Morning America.

Max Shifrin was born in the United States of America and holds American nationality. His ethnicity is White American.

Max Shifrin earned Bachelor of Arts in History and Political Science from The University of Connecticut in 2005. Then he attended Brooklyn Law School from 2007 to 2010.

Max Shifrin served as a Student Prosecutor from August 2009 to June 2010 at Brooklyn Law School. Soon after his graduation, Shifrin joined Fried Frank in 2011. He left Fried Frank in 2013 to join Storch Amini & Munves, PC where he served for a year. Currently, Shifrin serves in the law firm, Baker Hostetler in New York since June 2014.

Max Shifrin's Net Worth And Salary

Max Shifrin hasn't revealed his net worth, however, his net worth is no less than seven figures. As per source, his current salary in the law firm, Baker Hostetler is around $167,670 per year. He was paid around $37,000 per year during his service in Storch Amini & Munves while his salary was $191,685 per year in Fried Frank.

Shifrin's wife, Sara Haines also has earned quite an impressive amount of net worth. She has been paid well as the co-host of The View. Her co-host in the show, Whoopi Goldberg's salary is around $5 to 6 million annually so we can a s sume Haines salary is close to Goldberg.

As per Celebrity net worth, Sara has an estimated net worth of around $6 million, in 2018.

Max Shifrin is currently married to television host and journalist, Sara Haines. The couple met through a dating site, OKCupid and tied the knot on 22nd November 2014. The big day was held in The Bahamas.

The couple together has two children. Haines gave birth to their first child, Alec Richard Shifrin on 5th March 2016. Years later she revealed that she is pregnant with their second child on one of the episodes of The View in June 2017. Their second child, daughter, Sandra Grace Shifrin was born on December 23, 2017.

It was announced on January 3, 2019, the couple is expecting baby #3. The new baby will join big sister Sandra and brother Alec in July 2019. Sara has shared a number of snapshots of her adorable family to the social media.