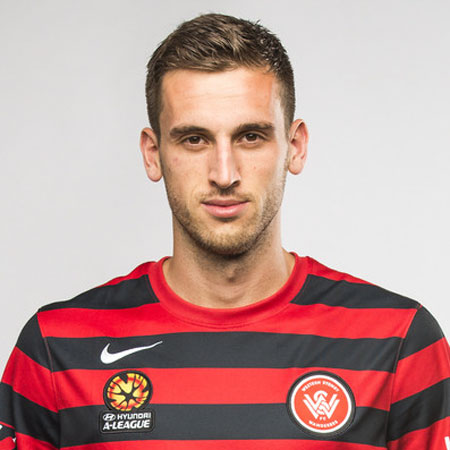 Matthew Thomas Spiranovic is widely known as Matthew Spiranovic. He is an Australian football player who started his career with Melbourne Victory, making one competitive appearance before being released with the consent of coach Ernie Merrick to join German Bundesliga club 1. FC Numberg.

He actively plays for Western Sydney Wanderers and the Australian national association football team. He has represented Australia in the 2010 and 2014 FIFA World Cup, 2005 OFC U-17 Championship, 2005 FIFA U-17 World Championships, 2006 AFC Youth Championship, 2008 Summer Olympics and 2011 AFC Asian Cup.

He played junior football in Geelong and Melbourne. He has also represented Victoria in U-14 and U-15 Australian national championship level. He got the scholarship from the Victorian Institute of Sport and was awarded best junior player of the year receiving a Weinstein Medal in 2005 by the Football Federation Victoria. He also got selected in the Australia U-17.

He played against Palestino U-17, Universidad Catolica U-17, Colo-Colo U-17 AND Chile U-17. The tour for Chile was a kind of warming matches to play for the ultimate OFC U-17 Championships 2005.

He graduated from the Australian Institute of Sport in 2006. He was selected for the five-match tour of South America where he played against Colo-Colo U-20, Universidad de Chile U-20, Chile U-20 and Argentina U-20. This tour was a preparation for 2006 AFC Youth Championship and the qualification campaign of 2007 FIFA U-20 World Cup.

After the intense training in Melbourne victory, he played his first friendly match in April 2005 against Oakleigh Cannons. He joined the club FC Nurnberg in October 2006. He debuted for the club on 30 January 2007 playing against Borussia Monchengladbach that ended with a draw 0-0.

He frisked the rest of the season battling a long-term hamstring injury, ruptured ankle tendon. He was transferred to a Japanese club Urawa Red Diamonds on 7 January 2010. Spiranovic debuted for the club on 31 March 2010 against Jubilo Iwata in the 2010 J. League Cup with a winning streak 2-1. Due to the catastrophic earthquake and tsunami devastating the country, Spiranovic returned to Australia. He was signed by a Qatari club on 9 July 2012 with a two-year contract. Spiranovic returned back to A-league for the 2013-14 seasons signing a contract with Western Sydney Wanderers.

His father is an established footballer who plays for North Geelong Warriors. His parents have been a great support to him. He did his schooling from St. Robert’s Primary School of Geelong and attended St. Joseph’s College from 2001-2005.

Spiranovic's two younger sisters Amelia and Laura are both actively engaged in the sports field. He has received several honors throughout his career such as Weinstein Medal Junior player of the year 2005, OFC U-17 Championship, 2005.

Matthew Spiranovic's net worth is around $1 million at present. He earns an annual salary of $85 thousand as per some online sources.

He stands at the height of 1.93 meters and weighs 87 Kg. He is not active on social networking sites.