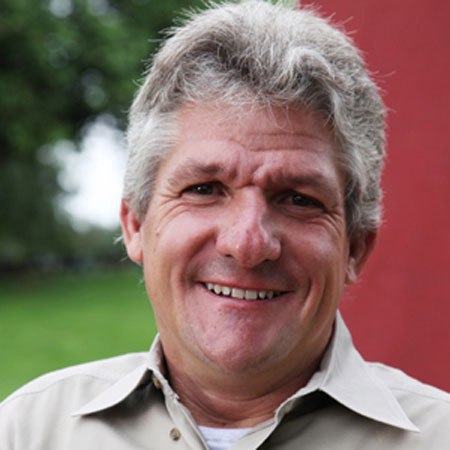 Life wasn't always peachy for Matthew Roloff as he had to went under 15 surgeries to overcome Diastrophic dysplasia which affected his bone development and eventually resulted in dwarfism. But like the saying Nothing is impossible, Roloff worked really hard and became a successful person who is a source of inspiration to many people. He rose to fame from his reality series Little People, Big World, but he isn't limited to the show as he is a motivational speaker, author, farmer, and business entrepreneur.

Matthew Roloff was born Matthew James Matt Roloff on the 7th of October 1961 in San Francisco, California. He is a son of Peggy Roloff and Ron Roloff.

Life wasn't easy for Roloff as he was born with diastrophic dysplasia, which affects bone development because of which he underwent 15 operations as a child.

Matthew Roloff began his acting journey from the 1985 television film Ewoks: The Battle for Endor. In the movie, appeared as an Ewok. He, however, couldn't continue his acting journey and worked as a computer programmer for Silicon Valley companies.

Later, Roloff and his then-wife Amy Roloff moved to Portland, Oregon when he got better job opportunities with Sequent Computer Systems.

Learn some interesting truths about Matt Roloff in the video given below:

In 2005, he caught the attention of the public with the reality show, Little People, Big World. The pilot of the series was premiered in March 2005 and its first season was aired a year later on March 2006 on TLC Network.

The reality series shows the day to day life of the Roloff family and their life struggle at their farmhouse in Helvetia, Oregon. Matthew and his wife Amy purchased the 34-acres farmhouse back in 1990 which is frequently featured on the show.

In between the reality show, Roloff was engaged in other jobs as well. At the end of the first season of Little People Big World, he was seen joining a computer sales company Amdocs as a consultant. The reality series was a completely new subject for the audience and eventually became a hit.

In 2010, the show successfully completed its 6th season and after a break, they came back in 2012 with the spin-off Little People Big World: Wedding Farm. As of 2018, the series is still running on the TLC Network.

Apart from the reality series, has written three books so far. Here's a list of his books.

Besides, Roloff is also a co-founder of the Direct Access Solutions, which provides accessibility products for little people. Also, he is a motivational speaker and is a member of the National Speakers Association.

So far, the reality star has spoken for Tyson Foods, Walmart, the Manitoba Childcare Association, the Illinois Holocaust Museum, and Education Center and many other organizations. Roloff also appeared on several talk shows including the Oprea Winfrey Show, Chelsea Lately, Good Morning America, and others.

Matthew Roloff is a multitalented personality as a reality star, author, business entrepreneur, motivational speaker, and farmer. As per some reliable sources, he has acc u mulated an attractive net worth of $4.5 million.

Roloff is a main cast of the Little People, Big World show since the beginning. For his appearance on the series, he is paid a growing salary. As of 2018, his estimated salary in course of the 12th season is approx $120,000 per episode.

Besides his acting roles, he is also earning a handful amount of money from his other jobs which adds a great sum in his incredible net worth of $4.5 million.

Previously, the reality star Matthew Roloff was married to his Amy Roloff. The former couple first met at the Little People of America convention in 1987. Shortly after they became engaged and the same year, the couple walked down the aisle on 12 September.  Matthew and Amy both are suffered from dwarfism. The former stands at the height of 4 feet (1.22m) and the latter at 4 feet 1 inch (1.27m).

In 2015, the pair broke the shocking news of their divorce. The news came as a complete shock to the fans cause they looked very compatible. However, their divorce was finalized in 2016 and the two officially ended their 27 years long marriage.

CAPTION: Matthew Roloff with his family SOURCE: In Touch Weekly

Matthew and Amy are parents to their four children; twin son Zachary Roloff and Jeremy Roloff born in 1990, a daughter Molly Silvius born in 1993, and another son Jacob Roloff born in 1997. Zachary has achondroplasia like his mother Amy which resulted in dwarfism but other three children are healthy and are of normal height.

After the divorce, both are moved on with their respective partners but they are on good terms and works together for their farm and show. Roloff is now dating his girlfriend Caryn Chandler since 2016.

The star is actively involved in several charitable organization. He is a former president of the non-profit organization Little People of America. Through his organization Direct Access Solutions, he works to ease the life of little people like him. In 2008, Roloff flew to Iraq for medical help to the family with three children suffering from dwarfism.

In 2003, Roloff was charged with driving under the influence of alcohol,  since he agreed to take part in an alcohol division program and completed it, the charged were dropped. In 2007, he again was charged with the DUI when he was found driving outside the lane. Roloff was not found guilty to the charge as a witness said he was not drinking that night.

In 2013, Roloff family sued a county building inspector of Washington County, Oregon who entered their property without a warrant or permission.