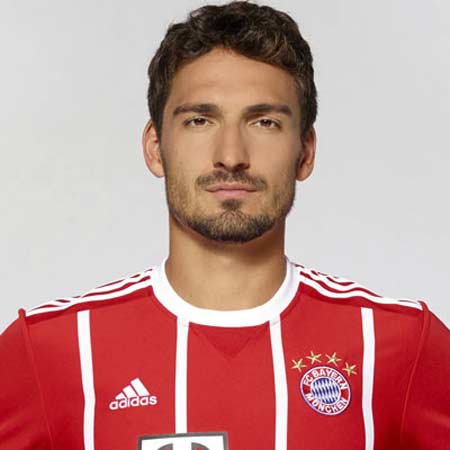 A technically gifted and tactically versatile central defender, Mats Hummels also can play as a defensive midfielder. He currently plays as a central defender for Bayern Munich and Germany national team. The footballer made senior club debut in January 2008 after he officially signed a contract with Borussia Dortmund.

Having representing Germany at U20 and U21,  Hummels made his full international debut on 13 May 2010, playing a friendly match against Malta. He became the only goalscorer in the 2014 FIFA World Cup's quarter-final match against France. Following his performance in the tournament, he was also named on the 10-man shortlist for FIFA's Golden Ball award.

Mats Hummels was born in Bergisch Gladbach, North Rhine-Westphalia, West Germany, on 16 December 1988. He is the son born to Ulla Holthoff and former footballer and manager Hermann Hummels. His father worked at Bayern Munich as a youth coordinator. He got early inspiration to become a footballer from his father.

Hummels is German as per nationality and regarding his ethnicity, he is Caucasian. He was raised up in his hometown Bergisch Gladbach along with his younger brother, Janas Hummes who is a retired footballer; did not play further due to multiple injuries.

At the very early age of 6, Mats Hummels joined the Bayern Munich's youth soccer academy. And he signed a contract professionally at the end of 2006 for four-year. But he transferred to Borussia Dortmund in January 2008 on a loan. Widely known for his powerful tackling and strength in the air, he quickly established himself as one of the best defenders in the club.

Following his impressive performance, Hummels made an agreement for a fee of  €4 million with the club. During the 2010-11 season, he gained much appreciation after he and Neven Subotic helped the team to win the league title. During his career with the club, he won the Bundesliga in 2010-11 and 2011-12 as well as the DFB-Pokal in 2011-12. He netted 19 goals in 225 appearances for the club.

Mats Hummels made his international debut for Germany in 2009 and was a part of Germany's UEFA European Under-21 Football Championship winning squad. He made his senior appearance playing in a friendly match against Portugal. He got a chance to play all 450 munites in Germany's Euro campaign due to his good performance in the previous matches.

Hummels led his team to the semi-final of the 2014 FIFA World Cup scoring the winning goal in the quarterfinals against France. He was one of 10 shortlisted players for FIFA's Golden Ball for the tournament's best player on 11 July 2014. And for the first time, he became the captain of Germany in a 0-0 draw match against England, on 10 November 2017.

As per estimation made by Celebrity net worth, Mats Hummels' net worth is $12 million as of 2018. He signed a contract for a fee of  €4 million with the club Borussia Dortmund, in February 2009.

CAPTION: Mats Hummels is the proud owner of Mercedes. SOURCE: Cars Of Stars

He came back to his old club Bayern Munich in 2016 in a £30million transfer.  He was also sponsored by Adidas. Here is the list of his car collection,

Mats Hummels is a married man. He tied the knot with his girlfriend Cathy Fischer in June 2015. They organized their wedding ceremony at the Mandelstra s se registry office in Berlin. Fischer was named as Germany's Wives And Girlfriend of the year for 2013.

As per reports, the two has been together since Hummels was 19. Hummels and his wife Fischer are blessed with a son, born on 11 January 2018.

Hummels is also involved in several charitable projects. He joined the Common Goal project in August 2017 and became the second footballer to donate 1%  of his salary to a collective fund which helped football organizations to generate sustainable social development all over the world.