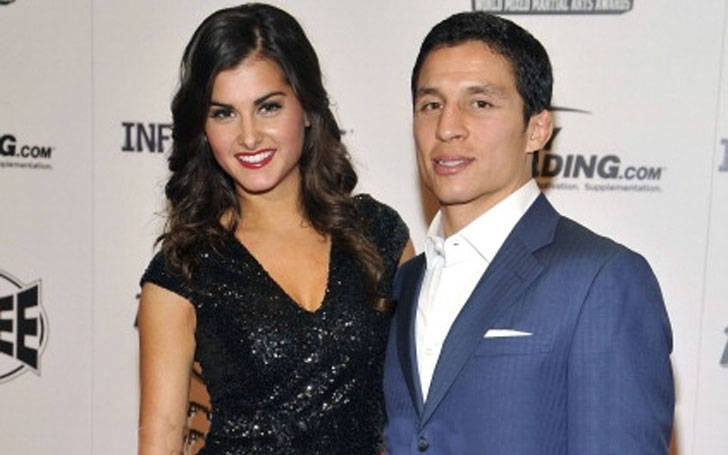 Joseph Benavidez is an American martial artist who currently fights as a flyweight in Ultimate Fighting Championship. He previously fought in small shows and has worked as a screen printer in Las Cruces, New Mexico.

He joined as a member of Urijah Faber’s Team Alpha Male in 2007 and fought in Dream. He ranks number one in the UFC’s official flyweight ranking and number two in the world.

Joseph Benavidez is married to Megan Olivi on October 9, 2015. The ceremony took place in JW Marriott Las Vegas Resort and Spa. The two first met each other in the summer of 2009 in Las Vegas. They were introduced and were friends for some months before starting their love relationship.

Megan Olivi is a host and a reporter who currently works for Fox Sports. She even interviews fighters. Previously, she served on an MMA website. She holds MA in Journalism, Mass Studies, and Public Communications and is a reporter at UFC.

Benavidez and Megan got into love relationship in 2010 and were engaged in late 2014. They enjoyed some years of romance after Megan moved from New York to Las Vegas. Benavidez proposed her for marriage in front of friends, Megan’s parents and Joseph’s mother with his knee bent down which Megan remembers as a memorable event of her life. The couple is happy and enjoying their time together.

Early life and short career of the Martial Artist

Joseph Benavidez was born in Texas and is of Mexican descent. He first trained boxing, kickboxing after joining Las Cruces High School. He was very good at kickboxing and won many championships of kickboxing in his early days.m He began training wrestling at the age of 16.

Benavidez was a fighter in smaller shows and even worked as a screen printer. He somehow met Urijah Faber, a mixed martial artist, and impressed him with his fight. He joined Team Alpha Male and went on to become the best fighter in Dream. Benavidez was later signed by World Extreme Cagefight which was later merged to Ultimate Fighting Championship.