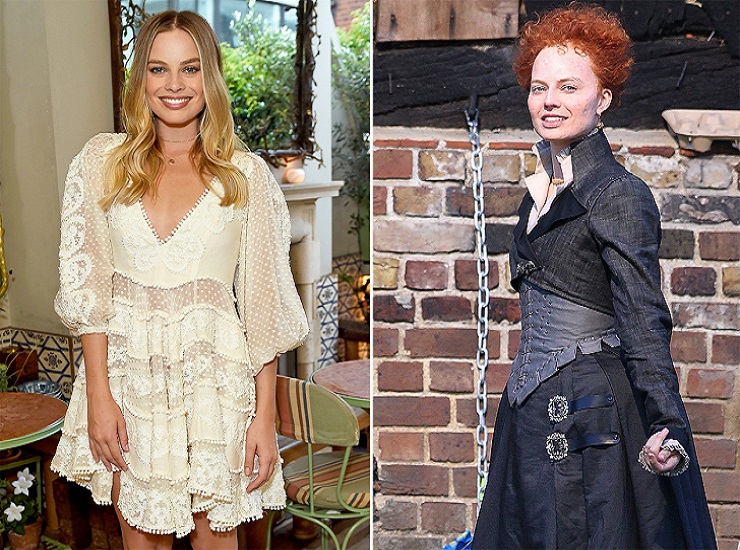 Is that Margot Robbie? Really?

The 27-year-old Australian actress, Margot Robbie, is totally unrecognizable as Queen Elizabeth in her new movie Mary Queen of Scots. She debuted the bold and to most extent historically accurate new look during the movie's filming in London this week. Robbie as Queen Elizabeth made onlookers and fans do a double take.

The film will chronicle the unsuccessful attempt of Scottish Queen Mary to overthrow Queen Elizabeth I ( Robbie's character) for the English Crown, the movie also depicts Queen of Scots' imprisonment and eventual execution.

Margot Robbie's methodical transformation-from her usual glossy blonde locks and white flawless skin to a blotchy complexion with partially shaved head and fiery red hair- is Robbie's most extreme transformation for a role till date. Reportedly, Queen Elizabeth's face had pock-marks due to smallpox, and she used to cover the marks with white makeup that was dangerous and damaged her skin further.

Margot Robbie as Queen Elizabeth in Mary Queen of Scots

.It was not just her hair and makeup, Margot Robbie also transformed through costumes, she donned the traditional Tudor wear for her role as Virgin Queen. The costume included a black ensemble consisting of a wide buckled skirt, jacket, and a corset.

Margot Robbie as Naomi in The Wolf of Wall Street

This time around, Robbie plays opposite Irish actress Saoirse Ronan who plays the title character of Mary Queen of Scots. British actor, Joe Alwyn, 26, who is in the limelight as Taylor Swift's new boyfriend plays the character of Dudley, Queen Elizabeth I's lover and counselor!

The movie Mary Queen of Scots in based on 2004 biography by John Guy titled The True Life of Mary Stuart. The film will release in 2018.