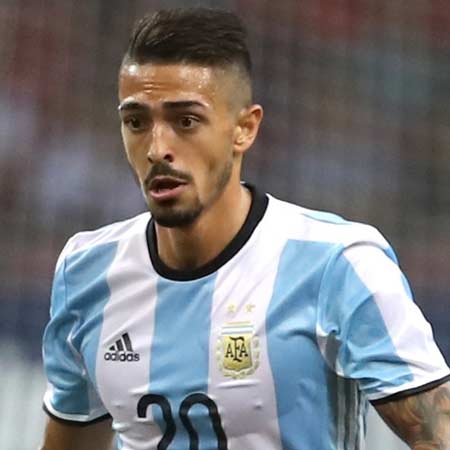 He currently holds the record of being the player that scored the earliest goal in the history of Argentina's derby, the Superclásico, scoring only 43 seconds after the starting of the match.

Manuel Lanzini was born on February 15, 1993, in Ituzaingó, Argentina. He is of Argentine nationality belonging to Argentines ethnicity.

He is the son of Hector Lanzini and Miriam Tejera. He has a brother named Tomas Lanzini who is also a footballer currently plays as an attacking midfielder for Primera División club Ñublense.

His father was also a footballer and has played for Sporting Cristal and Deportivo Moron.

He spent his early career standing out in indoor soccer football divisions, demonstrating his capabilities in the class of 1993 of the neighborhood club, Club Academia Kaly de Ituzaingo.

Ramon Maddoni, an Argentine Super Scout wanted to take him to Boca Juniors for a test match but the call was declined by Lanzini, as he was aimed to play with the club that he supported Club Atlético River Plate.

Lanzini was finally taken to River Plate in 2002, where he started to play in junior divisions. He made his official debut for the club in a friendly against Central Norte that ended with a 3-0 win over the opponent.

Lanzini’s performances and playing styles made the club’s president name him “The New Neymar.” His most important goal for the club was against Flamengo in the Río de Janeiro Fla-Flu derby.

Lanzini was transferred to the UAE Pro-League club, Al Jazira for a fee of $6 million with a salary amounting to $12 million in 3 years. He signed the four-year-contract with the club becoming the youngest foreign player to play in the UAE Arabian Gulf League.

He currently plays for the Premier League club West Ham United. He signed with the club on July 22, 2015, on a season-long loan, with an option to make the move permanent.

He played 39 games in all competitions for West Ham scoring eight goals. He scored the only goal in a 1-0 away victory over Crystal Palace giving West Ham their first away win of the season.

He was named in Argentina’s final 23-man squad for the 2018 World Cup in Russia, on 21 May 2018. He started in the 4–0 friendly victory against Haiti on 29 May in Buenos Aires, playing an hour before being substituted for Maximiliano Meza.

His current market value is $21 million (€18 million approx.). He currently plays for West Ham and the Argentine national team; he was transferred to the club for a fee of €12 million.

Lanzini stands the height of 1.6 meters and weighs 59 kg.

Lanzini might be married, as he has not revealed many things regarding his marital status. He has a son named Benjamin Lanzini. He has not disclosed the named of his mother to the public.

Despite the popularity, he has managed to keep his personal life low profile.