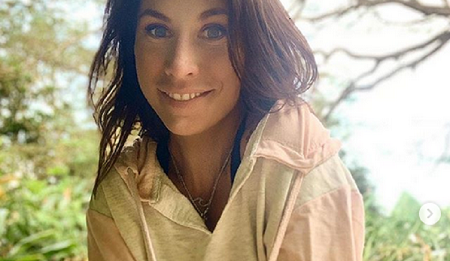 Lyssa Chapman is known as Baby Lyssa who is an American businesswoman, former bail bondswoman as well as a bounty hunter. She is most noted for her role in the American reality television series, Dog the Bounty Hunter along with her father Duane "Dog" Chapman and other family members, where they track down and capture wanted fugitives.

Lyssa was married to Brahman "Bo" Galanti from 2009 to 2011. The couple has one child together. After their divorce, she is now in a relationship with Leina Evensen, got engaged in 2018. As of 2021, she owns a tanning salon with her now-partner.

Who Is Lyssa Chapman?

Lyssa Chapman was born as Lyssa Rae Chapman on June 10, 1987, in Denver, Colorado, the United States of America. She belongs to white ethnicity and holds an American nationality.

Chapman is the daughter of Lyssa Rae Brittain and Duane 'Dog' Chapman. Her father is an American bounty hunter & a former bail bondsman whereas her mother was an alcoholic. Her parents were married from 1982-1991.

Following their divorce, Duane married Twany Marie Chapman from 1991-2003. For the fifth time, the renowned American TV personality went on to marry Beth Smith in 2006. The couple was together until Beth's death on June 26, 2019, at The Queen's Medical Center.

Chapman’s mother is the third wife of her father. When she was a child, her parents divorced and raised by her father until she was ten after which she went to live with her mother in a small Alaskan town, Anderson, and had no contact with her father for six years.

She later worked with her father at the family bail bonds company, Da Kine Bail Bonds. She left to work with her family and did not become part of their show that debuted in 2013.

Chapman is the ninth of twelve children of her parents. She is the sister of Tucker Chapman and Barbara who was killed in a car accident on 19 May 2006.

Lyssa and Beth were often spotted digging on each other on social media. They never missed a chance to directly or indirectly target each other which is why Lyssa was criticized by Beth's fans after her untimely death.

However, later, her father God stated that the quarrel was only limited to social media and they were actually close to each other.

“It was a mother and daughter,” Dog stated “Girls love to tell on each other on social media… [but] there wasn’t any pity, you know, like ‘Lyssa saw she was getting sick so she had to make up with mom’… That wasn’t happening. They just ran out of stuff to say and that was it.”

Chapman came into the limelight after appeared on A&E TV's "Dog the Bounty Hunter," along with her family members and friends.

CAPTION: Lyssa Chapman is known as Baby Lyssa who is an American businesswoman, former bail bondswoman as well as a bounty hunter SOURCE: Getty Image

Currently, she is the owner of Proper Choice Inc- A non-profit foundation, which educates the community on teen pregnancy. She is also the owner of Hawaii’s Premiere Tanning Salon, No Tan Lines LLP, Home of the Better Body Bed with Red Light Technology.

How Much Is Lyssa Chapman Net Worth?

Lyssa Chapman earned a fine amount of net worth from her career which adds up to her net worth is around $500 thousand, as per Celebrity Net Worth, as of March 2021. On May 7, 2013, she released a book titled Walking on Eggshells: Discovering Strength and Courage Amid Chaos which is priced at $11.99 for Kindle and $23.25 for Hardcover.

Lassy has garnered the largest amount of money from her various business ventures.

In February 2011, Chapman filed a divorce with Galanti due to domestic violence. Her husband, Galanti was violently abusing her during her pregnancy and she went to the marriage counselor, who helped her file for the divorce.

After her divorce from Galanti, Chapman went through a transition of sexuality. Now, she is a lesbian and dating her partner Leiana, who is a physical fitness trainer and Scuba Diver.

In 2014, Chapman and her two daughters Abbie and Madalynn were involved in a car accident in Hawaii, however, no injuries occurred in the crash.

Before her marriage, Chapman was already the mother of a child at the young age of 14, which was the result of sexual abuse.

The father of her first child was arrested for sexual assault. She gave birth to her first child, daughter Abbie Mae Chapman on the 11th of June 2002.

Engaged To Leiana Evensen Since 2017

Lyssa Chapman engaged to a fitness trainer, Leiana Evensen in 2017. The couple got engaged in December 2017 after a year of a dating relationship. She currently resides in Honolulu, Hawai.

A Serious Car Accident In 2014

In 2014, Chapman and her two daughters Madalynn and Abbie had a serious car accident in Hawaii near her residence.  Her black 4-door vehicle was involved in a collision in her hometown of Honolulu, Hawaii, according to TMZ. Emergency crews were called to the scene.

It’s unclear if there were any injuries or what caused the crash. But pieces of the car were strewn all over the road and the vehicle’s airbags were deployed.

Chapman was arrested on March 15, 2011, for criminal property damage and assaulting a police officer. She was out drinking with her friends and Chapman was spotted out walking the streets at three in the morning.  The cops arrested her for disturbing the peace.