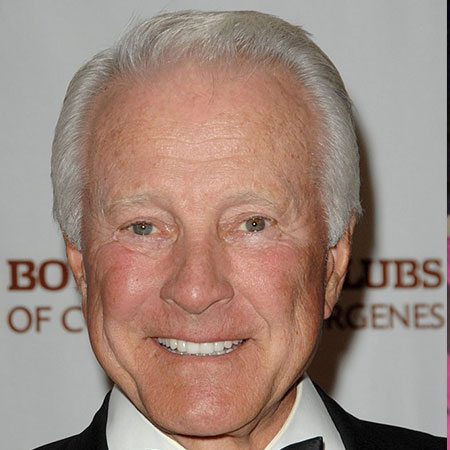 Lyle Waggoner is an American actor, model, and sculptor. He became famous after playing the TV series, The Carol Burnett Show and Wonder Woman. After retiring from his acting career, he started to make sculptures that are kept at Galleries West Fine Art.

Lyle Waggoner was born on April 13, 1935, in Kansas City, Kansas, the United States under the zodiac sign of Aries. His father's name is Myron Waggoner and mother's name is Maire Waggoner. Waggoner spent his childhood in Excelsior Springs, Missouri where he completed his schooling.

In 1954, he completed his education from Kirkwood High School in Kirkwood, Missouri. After high school, he joined Washington University in St. Louis. Waggoner even joined the US Army and served as a radio operator in West Germany for two years.

After he returned from Germany, he went to General Motors Institute of Technology to study mechanical engineering.

6 feet 4 inches tall, Lyle Waggoner started making his appearances in Television and films in the Mid-1960s when he started working on some TV series such as Batman as well as in the radio and television Western drama series Gunsmoke. Later, he got a minor guest role in season 3 of the TV series Lost in Space. He even did some modeling for Playgirl and he became the first male of the magazine.

Through the 1970s, he appeared in several TV movies and minor motion pictures including The San Pedro Beach Bums, Happy Days, Golden Girls, Ellen, The Love Boat, and Fantasy Island among others. In 1976, Waggoner was appointed as mayor of Encino, California which was not an actual government but an honorary "goodwill amba s sador."

In later years, Waggoner played the role of Steve Trevor for the pilot as well as the first season of the TV series Wonder Woman.

In 1979, after retiring from a full time acting career, he started Star Wagons company that leases customized location trailers for use by the entertainment industry.

Before he retired from his acting career, he worked in The War at Home in which he worked together with several award-winning actors including Rami Malek, Michael Rapaport, and Dean Collins. In 1990, he co-produced a consumer product show Consumer America where he appeared alongside co-host Shawn Bruner. In 1993, Waggoner became the host of an infomercial Let's Talk With Lyle Waggoner.

Lyle Waggoner's net worth is estimated to be around $10 million. As an actor, he has collected a decent amount of money. Moreover, he also earned a handsome sum of money as a television producer as well as from his modeling career which has made an awesome net worth of him.

Some of the hit movies he acted are Cataline Caper, Love Me Deadly, Surf II, Murder Weapon and Dream a Little Evil. Love Me Deadly, the 1972 movie was produced under a budget of $42,500 and collected a ma s sive $18.3 million at Box Office.

Waggoner owned a house in La Quinta, California which he listed for $2.1 million. He later bought an oceanfront home in Mandalay Beach for $3.925 million but he also sold it for $4.495.

Married To Sharon Kennedy For More Than Five Decade

The 84 years old, Waggoner is a married man, who has been married to his wife Sharon Kennedy, an actress, financial consultant, and realtor. Their marriage ceremony was held on September 17, 1961. The couple is blessed with two children, two sons Beau Waggoner and Jason Waggoner.

Waggoner is living a happily married life with their two sons near Jackson, Wyoming and he works as a sculptor. His sculptures can be seen at Galleries West Fine Art in Jackson Hole. According to the sources, he has houses in Manzanillo, Colima, Mexico, Oxnard California, and Westlake Village, California.

The couple has already celebrated 58 years of togetherness and still going very strong. To this date, no bad rumors regarding their relationship have aired.

He has white color hair and has light brown color eyes.

In a video presented below, Lyle Waggoner can be seen in an interview where he talks about his career.