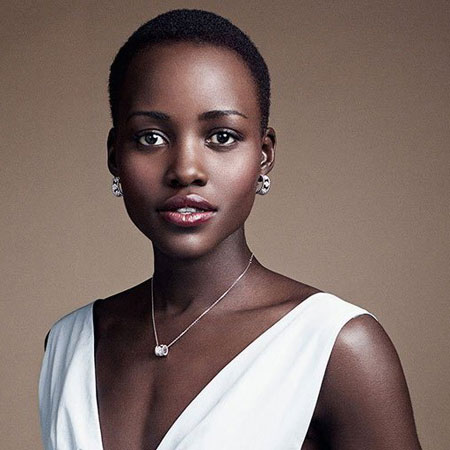 Most famous for her Academy Award-winning character Patsey in the powerful 2013 film 12 Years a Slave, Lupita Nyong'o is one of the prominent faces in the Hollywood industry. She is also famous for her work in Star Wars: The Force Awakens, Stars Wars: The Last Jedi, Black Panther.

Nyong'o appeared as a teenage orphan in the critically acclaimed play Eclipsed, in 2015. Besides acting, she is also an international filmmaker. She supports historic preservation and is vocal about animal rights and sexual harassment.

Lupita Nyong'o was born in Mexico City, Mexico, on March 1, 1983, to Kenyan parents, a managing director of the Africa Cancer Foundation Dorothy Ogada Buyu and a college professor turned politician Peter Anyang’ Nyong’o. She was raised in an artistic family who holds Kenyan-Mexican nationality and regarding her ethnicity, she is of Luo descent on both sides of her family.

At the time of her birth, Nyong'o's parents were in political exile, but later they were able to come back to their homeland of Kenya. Her father became a Minister for Medical Services while her mother worked as a managing director of Africa Cancer Foundation.

Lupita Nyong'o grew up in her hometown Mexico City along with her five siblings. She moved to Mexico to learn Spanish at the Universidad Nacional Autónoma de México's, Learning Center for Foreigners when she was only 6-year-old. She, later, joined Rusinga International school in Kenya.

Following her schooling, Nyong'o received an IB Diploma from the St. Mary's School in Nairobi, in 2001. Soon after that, she moved to the United States, studying at Hampshire College and earned a degree in film and theatre studies, in 2003. She also graduated from the Yale School of Drama in the year 2012.

The actress made her career debut as a part of the production crew in several movies including Where God Left His Shoes, The Constant Gardener, and The Namesake. Nyong'o later met the star of The Constant Gardener, Ralph Fiennes who inspired her to pursue in acting. She went back to Kenya in 2008 and made an appearance in the Kenyan television series Shuga.

The following year, Nyong'o became a filmmaker after writing, directing, and producing the documentary In My Genes. The documentary followed the stories of many Kenyans who are living with albinism.

Lupita Nyong'o’s phenomenal success came in 2013 when she got her breakthrough character in Steve McQueen's historical drama 12 Years a Slave. The movie is based on the 19th-century narrative written by Solomon Northup.

The movie grossed a whopping box office collection of $187.7 million worldwide against its budget of $17.1 million. She earned several award nominations for her mind-blowing performance including Oscars and becoming the sixth black actress to win the Academy Award for Best Supporting Actress in 2014.

Lupita Nyong'o also became the fifteenth actress to win an Oscar for a debut performance in a feature film. She featured in the movie alongside Chiwetel Ejiofor, Michael Fassbender, Benedict Cumberbatch, Sarah Paulson, Alfre Woodard.

Eclipsed And Other Breakthrough Movies (2013-present)

Nyong'o gained further popularity when she portrayed Max Kanata in a 2015 American epic space opera film Star Wars: The Force Awakens. The movie became an international hit, making $936.7 million in the US and Canada, and $1.132 billion worldwide.

Before that, Lupita Nyong'o also played the supporting character opposite Liam Neeson and Julianne Moore in the action-thriller movie Non-Stop. She returned to stage in autumn 2015 and played a starring role in the Public Theater's Off-Broadway production Eclipsed.

Nyong'o won several prestigious awards like Theatre World Award for Outstanding Broadway and Obie Award for a Distinguished Performance for her performance in Eclipsed. She was also nominated for Tony Award for Best Actress in a Play.

Lupita Nyong'o then appeared in Jon Favreau's The Jungle Book. The following year, she reprised her character Maz Kanata in a 2017 movie Star Wars: The Last Jedi. In 2018, Nyong'o played the role of Nakia in the Marvel Cinematic Universe superhero film Black Panther.

Nyong'o has also made an appearance on the covers of numerous magazines, including New York's spring fashion issue and the UK magazine Dazed & Confused. People announced her The Most Beautiful Woman, in April 2014.

Lupita Nyong'o was featured on the cover of Vogue in July 2014 becoming the second African woman and ninth black woman to be featured ever. She also appeared in many another popular magazines’ cover like in the July's issue of Elle, the October 2015 issue of American Vogue, the cover of Vanity Fair's Hollywood Issue, and the cover of UK's The Sunday Times Magazine.

According to Celebrity Net Worth, Nyong'o’s estimated net worth is around $5 million, as of February 2018.

Here's the list of her movies that made a good collection at the box office.

Nyong'o has been involved in various charity projects and organizations. She supports historic preservation. In 2014, she was recruited by the National Trust for Historic Preservation in an objective to oppose development, including a new minor league baseball stadium, in the Shockoe Bottom area of Richmond, Virginia.

After returning to her native Kenya in June 2015, Lupita Nyong'o announced that she will advocate globally for elephants with the international conservation organization WildAid and became the Global Elephant Ambassador for WildAid.

Nyong'o is also involved in the organization Mother Health International which helps in funding and building birth centers for the women and children in Uganda. Nyong'o launched anti-poaching "hearts and minds" campaign in April 2016.

In October 2017, Lupita Nyong'o wrote an op-ed for The New York Times revealing that she was sexually harassed twice by Hollywood producer Harvey Weinstein, in 2011, while she was studying at Yale.

12 Years a Slave star Lupita Nyong'o is unmarried and is not dating officially anyone. She, however, is rumored to be dating her Black Panther co-star Michael B. Jordan. The alleged couple is receiving lots of praise for their performance in the movie.

Previously, Nyong'o was romantically involved with GQ Style’s Fashion Editor Mobolaji Dawodu. The couple reportedly met through a mutual friend and started dating at the beginning of 2016. They, however, couldn’t last long and split up after a year.

Here is the video revealing five facts about Lupita Nyong'o,