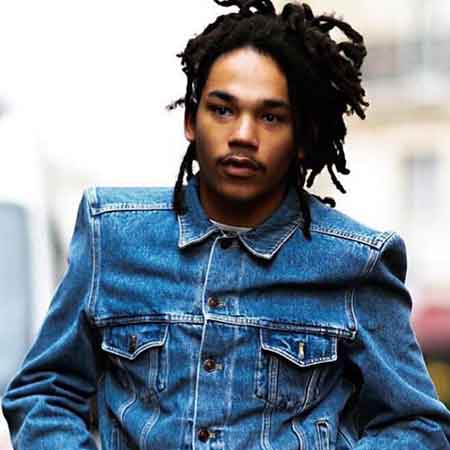 Coming from the fashion family, Luka Sabbat gained an initial popularity working with a number of reputable fashion publications such as Vogue, Complex, and Refinery29. A native of New York, Sabbat also worked for Dolce & Gabbana, Hugo Boss, Tommy Hilfiger, and American Eagle. Furthermore, he is also an actor who appeared in numerous TV series like Grown-ish and Black-ish.

Luka Sabbat was born on November 26, 1997, in New York City, New York. He is the son of Clark Sabbat, a fashion designer and Jessica Romer, a fashion stylist. He was brought up in Paris along with his half-brother named Lynn Levoy. He is a mix of Irish, English, German, and Haitian.

In an interview with the New York Times in 2016, Sabbat told that he never thought to pursue a career as a fashion designer despite being the son of a stylist and designer. Instead, he spent most of his time playing video games and listening to hip-hop.

As a child, Luka Sabbat attended a number of fashion shows. He later met the owner of ReQuest Model Management and made an agreement with the agency. It did not take much time for him to find a success in the field of the modeling industry. And he subsequently worked with several renowned companies like Italian powerhouse Dolce & Gabbana, Hugo Boss, Tommy Hilfiger, and American Eagle.

Sabbat has also worked for Vogue, Complex, and Refinery29 as well. Reputed news outlets like the New York Times and Forbes have published articles on him. He was featured in Adidas Originals “Future” campaign. And he later started working as an artistic director of a HotMess.

In addition to his modeling and designing, Sabbat also appeared in the TV series Grown-ish and Black-ish. He will appear in the upcoming comedy The Dead Don't Die along with Adam Driver, Bill Murray, and Selena Gomez.

Luka Sabbat's Net Worth And Salary

Luka Sabbat has collected a decent amount of net money which according to some sources is speculated to be more than $1 million. And as a professional model, his annual salary is more than $133,000.

Sabbat also started the LUKA X MONINI line along with jewelry designer Gianni Monini. Their items are ranged up to $2,400.

The rumored couple was spotted taking dinner at The Nice Guy restaurant in Los Angeles on 14th September. Afterward, the two moved to Chateau Marmont.

The two are yet to confirm their relationship. A source close to the Kardashians, however, said that the pair is not officially dating and he is only a good friend of her. He was also in a relationship with a young Australian woman named Dani Stani in 2014.

In the year 2017, the model started dating Costa Rican model Adriana Mora. The couple parted ways after a few months.

He has ama s sed a huge fan following on Instagram where he has over 1.4 million followers.