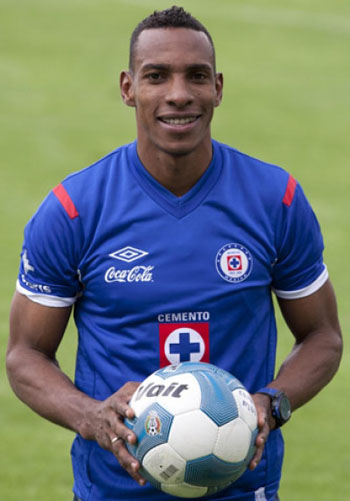 Luis Amaranto Perea Mosquera, commonly known as Luis Amaranto Perea is a Colombian footballer who was born on 30 January 1979. He was born in Turbo, Colombia. Perea basically holds his name as a strong Defender on the pitch. He is currently playing for the Mexican club, Cruz Azul. This right-footed central defender is widely recognized for his career spell at Spanish club Atletico Madrid. This defender has been well known because of his unprecedented stamina and pace on the pitch.

Perea is seen on the pitch with his No.14 shirt for both his nation and current team. He had 8 seasons long spell at Spanish La Liga making 306 appearances for his former club, Atletico Madrid.

Luis Amaranto Perea was into football from his early age. Football was his pa s sion and finding himself on the biggest football arenas around the globe was his ultimate fantasy. He unveiled his football capacity from his domestic club Independiente Medellin. Independiente Medellin was the very club from where he began his professional career.

Perea was unveiled in Spanish side, Atletico Madrid's outfit on 1 July 2004. He was signed by the Spanish giants for the transfer fee worth 3.3 million Euros. He initially signed on a four-year deal.  For his first season in the Primera Division, he made 33 appearances. Perea found himself on the right side of the pitch for most of the games after signing of ACF Fiorentina's Tomáš Ujfaluši by the club in 2008.

This right-footed defender managed to surpa s s Argentine Jorge Griffa’s record of foreign player with most numbers of official appearances for the club. He made 289th appearance for the club on 29 September 2011. He had the match against Stade Rennais FC on Europa League. Perea then went to Cruz Azul as a free transfer on 1 July 2012 after 8 years long spell with the Spanish club Atletico Madrid.

Luis Amaranto Perea won Primera Division Argentina for the season 2003-04 with Boca Juniors. He was also part of the team that won Intercontinental Cup in 2003. With Atletico Madrid, the Colombian international won UEFA Intertoto Cup in 2007.

With his Current Team, Cruz Azul, he won Copa MX: Clausura in 2013. He was also the part of Cruz Azul team that won CONCACAF Champions League in 2013-14.

Luis Amaranto Perea is married to Digna Luz Murillo Morena who is herself a professional athlete. She has participated in the number of Olympics too. The couple has been blessed with two children Daniel Perea and Juan David Perea.

Perea, the 35-year-old defender stands 181 cm tall in height and has a weight of 77 kg. His both height and weight accompanies him and makes him a strong defender on the field. This defender’s net worth is 3.3 million Euros. So far, the player's salary at Cruz Azul is undisclosed.