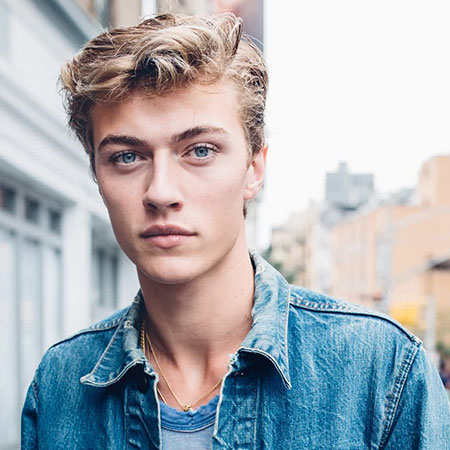 Lucky Blue Smith is an American model, actor, and a musician. A modeling agency scouted him at the age of 10 and by the tender age of 12, he was signed by an international modeling agency. Born and raised in a small town, Smith has established himself as a top model within a short time in the entertainment industry. He has also made appearances in internationally acclaimed talk shows such as "The Ellen DeGeneres Show."

Lucky Blue Smith was born on June 4 in 1998 in a small town of Spanish Fork, Utah, United States. Smith was born under the birth sign Gemini which describes him as empathetic and a friendly person. He was born as the youngest among four children to parents Dallon Smith and Sheridan Smith. One of his sisters, Pyper America Smith, is also a model and musician who plays in an alternative rock band. His other sisters are; Starlie Cheyenne Smith and Daisy Clementine Smith.

Lucky Blue Smith holds an American nationality and belongs to the White American Ethnicity. He along with his family relocated to Los Angeles after he was signed by Next Management while he was 12 years. Hedi Slimane, a French photographer photographed the star and his sisters for Vogue Homme Japan which created an immediate buzz. He was homeschooled following his contract with the modeling agency.

Lucky Blue Smith started his career when he was signed by Next Management when he was 12 years old. His initial photoshoot with Vogue Homme Japan created a lot of buzz in the media and his career took off when he dyed his hair platinum blonde which ultimately became his signature look. Subsequently, Smith started to shoot for magazine covers and by 2015, he worked for over a dozen magazines. Adding to this, he also appeared in the fashion campaigns for Philipp Plein and Tom Ford.

CAPTION: Lucky on the cover of GQ. SOURCE:

Later, Smith worked together with Lady Gaga in a Tom Ford video. Further, he also made his appearances in major magazines and editorials such as Ukrainian Vogue, GQ, British Elle. In addition, he also appeared on the cover of French and Spanish Vogue, GQ, V, and Harper's Bazaar among others. Smith has walked the runway for Fendi, Chanel, Roberto Cavalli, Moschino, Emporio Armani, DSquared2, Salvatore Ferragamo and appeared in advertising campaigns for international brands like Tom Ford, Calvin Klein, Moncler, Tommy Hilfiger etc.

Besides, Smith is also a musician who formed a surf-rock band, The Atomics with his 3 sisters. The band is also represented by Next where Smith was a drummer.

Lucky Blue Smith was called Modelling’s New It Boy by The Ellen Show. Smith has earned a decent amount of money from his modeling career. With this, Lucky blue Smith's net worth is estimated to be around $1 million as of 2018. According to the sources, the average annual income of an American model is estimated to be around $41,955.Salaries start at $16,771 and could reach up to $71,807 based on their demand and performances.

Moreover, Smith also makes a handsome amount of money from his involvement with the musical band. A musician reportedly earns $39,328 per year. Meanwhile, Smith has made a video featuring his lavish house in a suburban area with a big backyard and a swimming pool.

As far as Lucky Blue Smith's personal life is concerned, he is unmarried. As of 2018, Smith is not dating any girl, but he was dating Stormi Bree, a model who is 7 years older than him in the past.

CAPTION: Lucky and Stormi with their baby. SOURCE:

According to some sources, people even referred to Lucky as Stormi’s ex-boyfriend during a feud between Stormi and Kylie Jenner after she accused Kylie of copying her name after she named her daughter Stormi Webster.